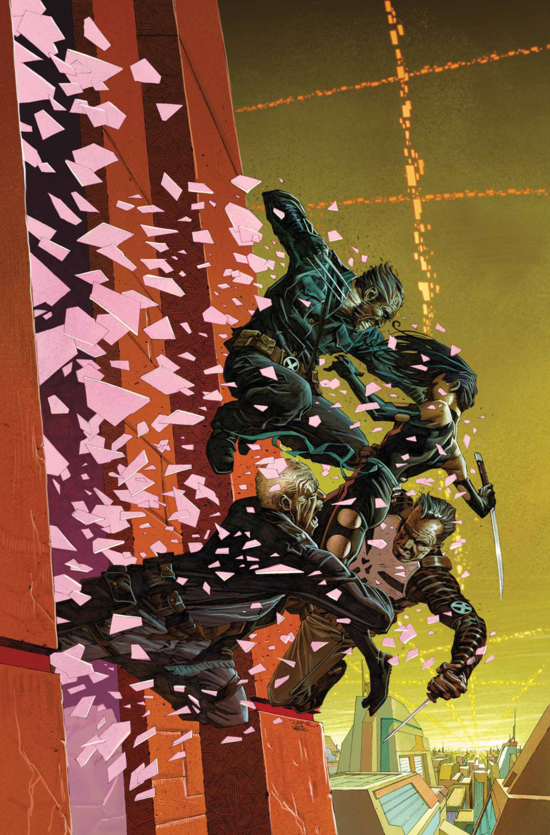 One of the things I hate most about comics in general is waiting a month in between parts of the story. If ever there was a time this irked me the most, it was the waiting period between issue #28 and #29 of Uncanny X-Force. The previous issue left us with Betsy lying in a pool of her own blood, her hands wrapped around her sword, committing suicide.

Betsy’s actions are justified; she would rather die now than risk a future where she purges the world of people with “impure” thoughts. The track Betsy takes as a member of the X-Force will ultimately lead to her dictatorship of free people. In one moment, Betsy sees the accumulation of the killing she’s done in the name of X-Force and how it corrupts her.

Of course, Psylocke doesn’t really die. The Punisher shows up just in time to save her (which she notes is ironic). In a valiant effort to avoid his rescue, Betsy is finally subdued by her future self. The two have a heart-to-heart about what the future needs from Betsy, but I am not entirely convinced she takes her own advice.

While the issue is pretty straightforward on the surface, there are several layers going on under the surface. Betsy’s suicide attempt was an effort to save people, yet the civilians in the future saw it as their ultimate doom. She saw only her role, and they feared the destruction of the entire universe. Additionally, future Betsy tries to explain her actions to present Betsy, who only focuses on the killing of innocent lives for the betterment of society. Is this system, which kills people before they commit crimes, really the best alternative to what we had? There’s more to the story, but, as with any time travel issue, everything cannot be revealed without endangering EVERYTHING (see why I don’t like time travel? It just gets so hairy!).

If you are interested in the X-Force or Psylocke, this is a great issue. It may be a little confusing at first if you haven’t read anything else in the series, but the opening credits page can help you get a grasp on what’s going on. Betsy does some growing, and the events in this issue are likely to impact Betsy’s immediate future and well-being.