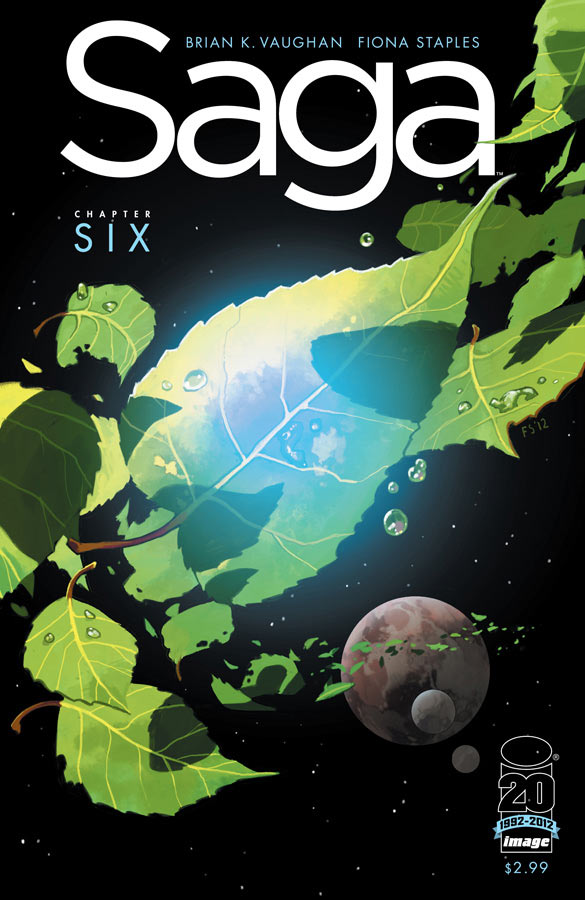 The crazy outta space love adventure of Alana and Marko and their newborn baby girl Hazel continue in this new issue. When we last left this family, they were surrounded by the folks who want them dead and they had to fight to get themselves out of harms way. Meanwhile, The Will-a freelancer who’s been hired to kill Alana and Marko and bring Hazel to his employer alive-deals with the consequences of killing a pimp and rescuing a six-year old slave girl.

Presently, the family is still on the run trying to find a ship so they can get off the planet. They eventually find the spaceship and blast off into orbit safe at least for the moment from their pursuers…In the meantime, Prince Robot deals with an unknown caller (who is The Will) on the newly dead Stalk’s phone. Back onboard the peaceful ship the peace is broken by two mysterious persons which leads to a surprise and unexpected ending to this issue.

Brian K. Vaughan and Fiona Staples are a creative team match made in heaven! The writing is awesome and the art is just phenomenal! This is what makes a great comic book. Creativity, imagination, and great writing and artwork.

Verdict:
Get this book, no, get the entire series! SAGA is an excellent example of why 2012 is the year of the indie creator. I guarantee that once you start reading this series, you won’t want to put it down.