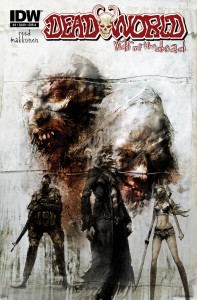 Dead World: War of the Dead #3

Gary Reed’s Dead World: War of the Dead mini-series keeps on trucking this week with more zombies and more dystopic ethical ambiguity! The King Zombie sends a horde of his undead underlings to assault Safe Haven, and flaming arrows abound as Mike leads his Lepers and Survivors into battle! That’s right: Flaming. Arrows. Dead World is proving to be a solid 5-issue mini-series with strong writing and big ideas.

The high-points of this issue come from two sequences featuring zombie-sympathizer Sgt. Bowker. A human working with King Zombie? But… why!? Well, Bowker’s reasons for siding with the dead—food, shelter, security, comfort, survival—effectively complicate the typical zombie-dystopia story. Under the King Zombie, Bowker and the other humans are given enough food and resources to survive. They work for the King, yes, but as long as they continue to reproduce and stay healthy, they aren’t in any immediate danger. The King feeds his zombie hordes the old, the ill, the weak. Survival of the fittest in zombieland. Rule #1: Cardio.

After the aforementioned medieval throwdown between Safe Haven and the undead, our merry band of Lepers and survivors are low on ammo and resources. Bowker points out that King Zombie could obliterate them at this point, but big KZ remarks that the survivors would be of more use in his breeding pens. He sends Bowker to negotiate with Mike and the leaders of Safe Haven, and the tension in the room is palpable. Gary Reed does an excellent job of portraying Mike’s desperate desire to protect his people.

The only story thread that Reed hasn’t been able to address in much detail since issue #1 concerns Donna the Sword-Wielding Half-Zombie/Half-Human and Dan the Leather-Duster-Wearing Sawn-Off-Shotgun-Toting Zombie-Slayer. More specifically, where they been at? They get one page early on in issue #3, but only to effectively remind us that they exist. Here’s to hoping that Donna and Dan get more involved next week, if only so that we can get some sword & shotgun action going on.

Last week, it was difficult to distinguish between some of the talking heads; this week, with the return to more kinetic sequences, Sami Makkonen’s art is on the upswing. His murky, shadowy artwork is well-suited to Reed’s script, mirroring the ambiguity of each character’s moral laurels and building terror elements. And his King Zombie is simply terrifying. It’s the sunglasses.

If you haven’t been following along, you’re already 3 issues behind! And next week is issue #4! Jump on if you’re into the whole zombie thing. It’ll be done by the end of the month, but you’ll have read through a solid zombie yarn replete with big questions about morality and survival under extreme circumstances. Whose side are you on?