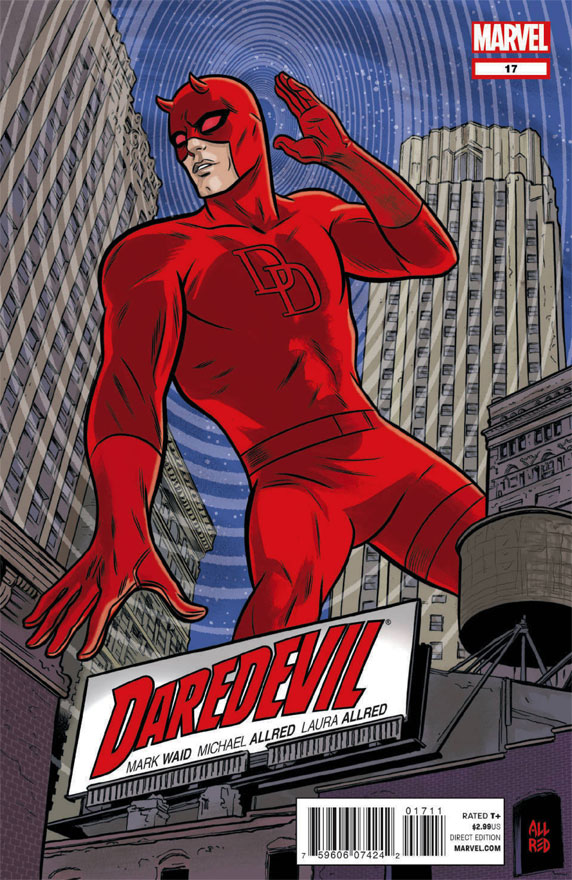 I’ll get this out of the way first thing–if you are reading ANY Marvel book, then it had better be Mark Waid’s Daredevil. The Man without Fear couldn’t be in better hands. Daredevil #17 is prime example of just why this book is so damn good! Mark brings a lighter side to Matt Murdock without compromising the character driven story he has concocted.

We pick up with Matt pondering just who is out to drive a wedge between him and Foggy. Last issue we saw their partnership dissolve when Foggy found Matt’s father’s remains in Matt’s desk. It was difficult to read. It was heart wrenching, and I’ve only read 17 issues of Daredevil in my entire life. While mulling over the options we get a flashback of the early days between the two. Foggy is caught up in something that he can’t handle, and Daredevil has to bail him out.

It is in this flashback that we get some really profound character work. Foggy takes on a case he can’t handle with the sole purpose of giving Matt something that he can never get back. A scientist made a machine that can allow blind people to see, it not only briefly, and he is being hounded for his knowledge. After a break in at their office draws attention to this case, Foggy decides just to show Matt what it was he was hiding from him. This sequence is one of the most touching things I’ve read in a super hero comic. It’s bromantic on so many levels, but it’s not cheesy at all. It’s so genuine, and it leaves you feeling so high.

The art is handled by Michael and Laura Allred, and they do a fine job filling in for Chris Samnee. Samnee’s old school simplicity is a beautiful throw back, but the Allreds are able to bring the same type of feel to the book. In some places I felt like I was reading an Archer or Frisky Dingo book, because Matt has a striking resemblance to Sterling Archer and Xander Crews. That aside, everything is done so well. The lines are clear and distinct while everything is just detailed enough to keep the retro feel we have been getting. I love seeing Daredevil jump around the city, and it’s on display yet again this week. It’s all that you can ask for in a DD book.

This is my book of the week. Captain Marvel was great and stunning. Saga was, well, it was Saga! But this is something so different. By the time the flash back is done, you’re yelling at the book like you used to scream at the TV when Ross and Rachel would break up. “Just forgive Matt, Foggy! You know you guys are meant for each other, damn it!” BUY IT!