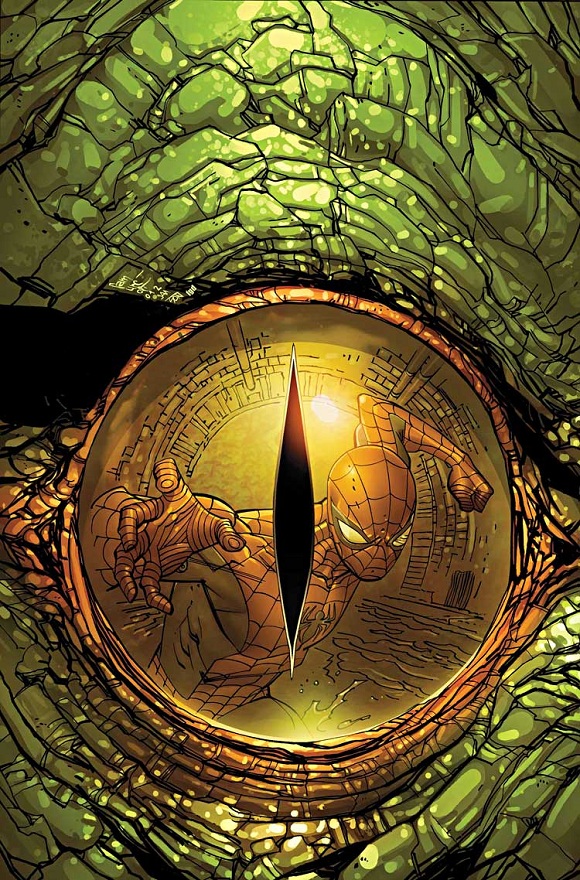 I will admit that Dan Slott had me really thinking about this series coming into Amazing Spiderman #691. I wasn’t a fan of Curt Conners’ sudden change of heart at the end of the last issue. I didn’t think that listening to pop music and playing a futuristic Wii would be enough to change the Lizard’s mindset, especially after “Shed”, but with this week’s issue I can see what Slott was moving towards. You see that it wasn’t necessarily the Lizard liking the thought of humanity, but rather Curt’s personality starting to emerge from its exile.

Dan Slott’s Amazing Spider-Man run is the first that I have read of the series. He’s done a pretty good job at setting Peter Parker up for the defining moment of this book, and I think it pays off pretty well. Peter has been ridiculously high strung lately (with good reason), but you really see just how close he is to breaking in his final battle with the Lizard. He reaches a point that I have never seen Spider-Man hit. I’ve always known him to be a smart ass that will do anything he can to help those around him. In the last few issues though, he has been hell bent on protecting everyone from everything. It’s almost a Batman like obsession with perfection. Peter’s life is littered with casualties that he blames himself for entirely, and the choice he has to make here is one that could change the character’s outlook moving forward.

I never like seeing two artists on a book. It’s usually an immediate red flag, but I was already invested in this run. Luckily, there isn’t a drastic change in the quality or style of work we get in the issue. The action in the book is handled really well. You can see the athleticism that Spider-Man possesses, and it’s a cool to see the uniform get shredded off of him with each blow. You would think he would have found a way to fix that problem after 691 issues, but I digress. The only major change in the art is the Lizard’s new look. I thought for sure they were dropping the snout to make it line up with the movie’s version, but (thankfully) that was not the case. It’s interesting but nothing that will blow you away. Personally, I just want the animated series style Lizard, but it won’t keep me from reading future stories involving Conners.

Amazing Spider-Man #691 does bring some pretty funny moments, and that is something that I feel has been looked over lately. It’s good to see the wise-cracking wall crawler on the page. And there is a panel with Lizard people letting their animal instincts take over that made me laugh out loud. I love when a book has a sense of humor, and that is what Spider-Man is known for. It was extremely pleasant to see.

Amazing Spider-Man #691 is a much better issue than the previous entry. It’s really well done, and changes the dynamic of the Lizard yet again. The final few pages of the book are really good, and they set up a very different Lizard for future stories. Buy it.