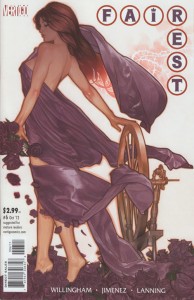 Part 6 is the final issue of the “Wide Awake” arc, and the final issue of Willingham’s as he passes the title off to another creative team next month, concluding the battle between Lumi and Hadeon. Up till now we’ve gotten an excellent glimpse on all the players, carefully exposing all the goals and aspirations of the heroes and heroines while bringing the plot to a successful climax. This issue puts a nice frame on the other 5 issues bringing to a point that, “all’s fair but love and war.” I did enjoy how things went from being so, “obvious,” to being turned on it’s head or just hanging upside down in this case.

Jimenez’s art never wavers during this arc, especially so in this one. I thoroughly enjoyed the depictions of Lumi, from Snow Queen to Snow Warrior, to something more warm-at-heart. I would’ve liked to have seen the work on a better paper-stock, to bring out the colors better, but that’s just a feature to look forward to in the deluxe editions and honestly that’ll never stop me from buying this book each month. As always, Hughes nails it completely with the cover art. I think this is one of the few books where the regular art just tops the variant art hands down as Hughes just pours such beautiful art on each issue month after month. This issue I did some research on the cover and I found on the artist’s blog that the logo treatment was done very intentionally to help symbolize the climax of the story. I love those sorts of Easter eggs in my comics.

The Verdict
Buy it. Then buy next month’s. It’ll be a perfect jumping on point, being that it’s a whole new ball game with (in theory) a whole new cast of players. For those sad to see Willingham taking a break from “Fairest,” I wouldn’t be too concerned, it’ll be a while but I think we’ll see him again and of course there’s always the great and powerful “Fables” to hold us over till then.