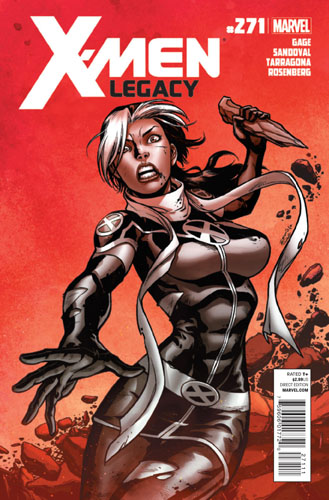 After the chaotic, high-stakes fighting in the past few issues of X-Men Legacy, issue 271 falls flat. True, it looks like the series is preparing for the end of AvX, but the resulting story is a poor follow-up to the fantastic previous issues, especially #270 and #269.

When Magik discovers Rogue helping the Avengers in the Limbo prison, she banishes her to an alien dimension. Le sigh. Rogue, alone and away from the main conflict that she had a decent part in, is now out of contact with everybody. Instead of being a part of a universe-spanning battle, Rogue is involved in a new battle with aliens. Immediately she starts busting alien heads and making friends.

Running low on Ms. Marvel’s powers, Rogue finds herself in a pickle. Once Ms. Marvel’s powers dwindle down to nothing, she will be stuck in a different dimension with no escape other than her own human ingenuity. That will be interesting; seeing Rogue in action as a “normal” person will demonstrate her strength as a leader and valuable member of the X-Men.

I understand that AvX cannot last forever. I’m already having trouble coping with the end of the crossover (never thought I’d say that…), and, if X-Men Legacy is any indication, Marvel is going to have to make the aftereffects of AvX pretty awesome to keep my attention and money. Rogue’s got her work cut out for her if she’s going to keep the readers involved in her story and role in the Marvel universe during this time.

I would skip this issue. It is a let-down after the AvX crossover, and involves aliens. Personally, I don’t like aliens/alternate dimensions stories, and this issue did not live up to the usual X-Men Legacy standard. Also, I don’t like Rogue’s bangs in this issue.