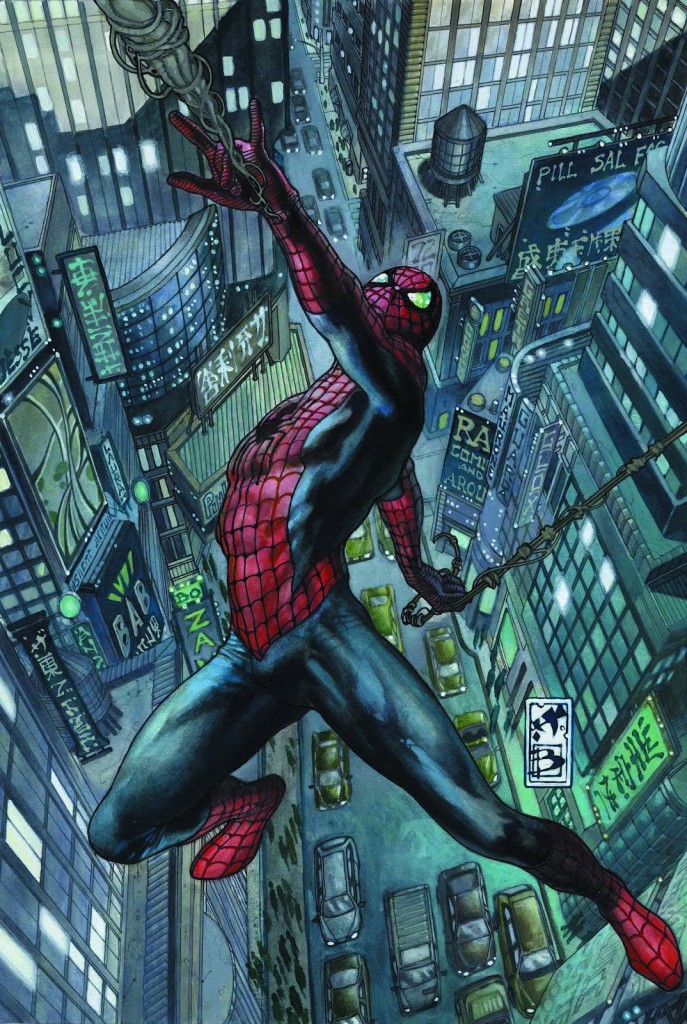 I’ve been reading a lot of Spider-Man lately. In the past couple of months I’ve managed to amass quite a plethora of different titles featuring everyone’s favorite webslinger, so what’s one more book right? The official word according to the solicits regarding the return of The Sensational Spider-Man #33.1 are as follows:

Celebrating 50 Years of the Great Responsibility of his Great powers, The Spider-Man 50th Anniversary Series collects the Webbed Wonder’s greatest heretofore secret history! Spanning from his earliest days as a hero to the heyday of the heralded Big Time era and everything in between, a collection of Marvel Legends, venerated comic creators and awe-inspiring artists shine the spotlight on everything that makes Spider-Man the World’s Greatest Superhero!

So with that in mind we’re placed within the pavement pounding shoes of Carlie Cooper, one of New York’s finest, as she polices the heroics and destruction of Spider-Man‘s latest tangle with The Vulture. A few damaged blocks of the city later we come to find out that someone is sneaking illegal immigrants into the city, against the wills of the captured of course. But who would do such a thing to their fellow man? Who would be cruel enough to pack living, breathing human beings into a giant metal bin without so much as food or water? That’s what we’re hopefully going to find out as Agent Cooper and the Sensational Spider-Man work together to uncover the mystery.

I’ve got to admit, it took me a few pages to warm up to Carlie Cooper. However, eventually I really came to admire her sense of justice and willingness to place herself inside of situations with absurd amounts of danger in the name of the people she’s so eager to protect. It’s that sort of fearlessness that makes her actions believable as she stares daggers at those would would threaten the safety of her city. In fact, I felt that even though this book is called The Sensational Spider-Man #33.1, it perhaps should have been called: Carlie Cooper: New York’s Finest #1. After all, her character plays a much larger role in this book than Spider-Man or even Peter Parker, respectively.

I see good and exciting things for this arc. Being so close to the books focal character is what really sells the excitement of this story. Carlie  might be a little rough around the edges but she’s the perfect vehicle for this sort of “humanitarian” tale. She fights for the people, she fights for what’s right, and she isn’t afraid of kicking a little ass to get the job done. Oh, and just so you know, Spider-Man is in this book as well. I know I’ve kind of been going on about Carlie but you can be sure that Spider-Man gets in on the action, spouting pithy quips the whole way through just as you’d expect. The polarized dispositions of the books two main characters makes for some great chemistry moments that I’m certain will continue throughout the run, provided that Carlie can stay out of trouble.

Buy it. If you’re in the market for yet another Spider-Man title to add to your pile than look no further because The Sensational Spider-Man #33.1 is your horse. The character work is really what sold me on this title. I’m no Spider-Man officiant or anything but I know good chemistry when I read it and the banter between Carlie and Spider-Man is solid stuff.

* This review was written while listening to the album Diamond Eyes by Deftones.