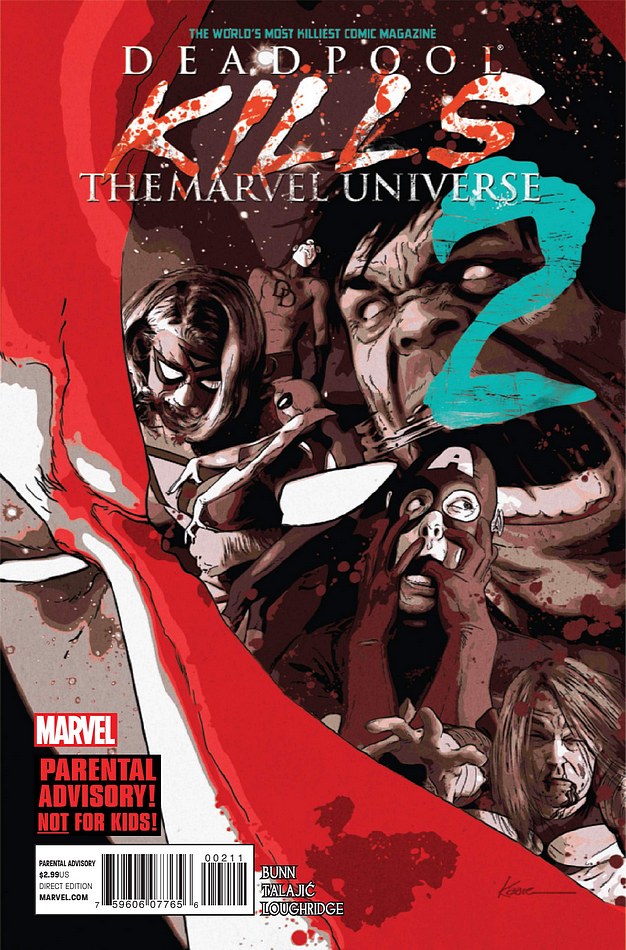 Deadpool was never really on my radar. I read him in a team book or two, but I generally avoided those Deadpool books that suddenly came to the forefront in the past few years. Deadpool Kills the Marvel Universe is more of a sick fascination for me, curiosity about how this feat will occur.

The second issue takes Deadpool’s rampage to the next level. After finishing off the Fantastic Four and the Watcher in the first issue, Deadpool moves on to kill Ghost Rider, Doctor Doom, and Howard the Duck…all in the first page. The general reaction is fear. If Deadpool can kill off some of the most powerful heroes and villains, what’s going to stop him from hurting normal people? These normal people watch in fear as Deadpool fights Spider-Man, one of the most recognizable and beloved heroes in the Marvel Universe. I don’t have to tell you what happens, but it doesn’t end well for Spider-Man.

Deadpool goes after the Avengers, the Earth’s Mightiest Heroes.  The creativity he employs as we takes down seemingly invulnerable beings is remarkable. With each kill, the voice living inside of Deadpool grows stronger, exerting more influence and control over his killing spree. The next kill has to one-up the last as he goes after bigger and more dangerous Marvelites.

From this second issue, I cannot picture what the end of the story is going to be like. In most comic books, the heroes recover, come back from the dead, or have been faking it the whole time. This is not that kind of story. To be honest, I’m excited to see how the Merc with a Mouth pulls off killing the world’s most powerful heroes and villains.

If you don’t mind seeing your favorite heroes dead, this is the series for you. There’s a certain sense of satisfaction knowing that they aren’t vulnerable, their day-to-day rescuing is truly a danger to them. We realize that the near-misses and miracles we normally see in comic books are what really keeps them alive. Deadpool kills with stunning accuracy, with no hope of recovery. Deadpool Kills the Marvel Universe is a great comic book for those who want to see what happens when Deadpool snaps.