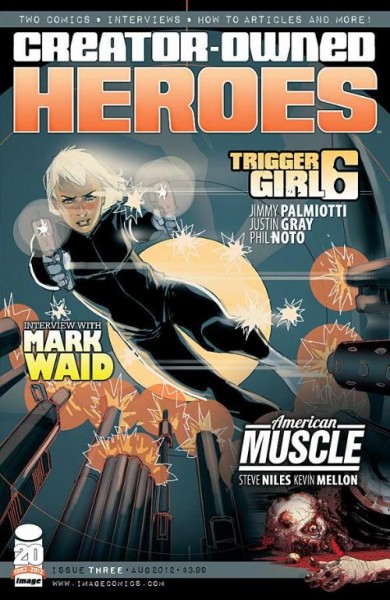 Designed and Lettered By: Bill Tortolini

Creator-Owned Heroes #3 starts off with a smash with the latest issue of American Muscle. The team are out in search of their missing leader, Gil, in a wasteland of toxic sludge and deadly mutants. They find him, sort of, and he’s been inducted in to an insane group of mutants led by a trigger happy ‘Sheriff’. It’s obvious to the team right away that Gil is in trouble, but they follow his lead in hopes that he’s got some kind of escape plan in the works.

As usual, American Muscle is great fun, creepy and fast paced. Already in issue #3, I feel invested in some of these characters and I want to see them succeed. I also want to see what is waiting out there in the undiscovered wasteland that once was the U.S. This story has a sense of humor while never letting you forget that danger is ever present. The art is a perfect bedfellow, being both gritty and playful in it’s style and delivery.

Next, we’re gifted with an intimate interview by Jimmy Palmiotti with Eisner winning writer Mark Waid, known for his work on DC Comics’ The Flash and Marvel Comics’ Captain America. It’s a lighthearted chat between friends in which they discuss influences, reminisce about past accomplishments and failures and fantasize about possibilities if money were not an issue.

My absolute favorite piece of bonus material in Creator-Owned Heroes #3 is a feature on the artwork of Phil Noto. It’s a stunning collection of his trademark retro style beauties, who all seem to posses an intriguing level of personality behind their painted faces. Phil provides some insight to the development of his work style and technique, as well as naming some of his biggest influences. It’s just a gorgeous sample of his work that I was really happy to see and works well as an intro to the next installment of Trigger Girl 6.

I was  less than excited about the development of Trigger Girl 6 in the last issue of Creator-Owned Heroes and am happy to say that this time around I found it much more interesting. We’re seeing a rapid movement now in the exposure of the mysterious assassin as something more than just mindless killing machine, perhaps even something with a real past to be discovered. The president and his security team struggle to keep her prisoner, then frantically try to track her when she escapes, knowing that even if she is destroyed, another trigger girl will be sent to complete her mission. The story is action packed and tight, but the real star here, in my opinion, is the art of Phil Noto. It is clean and textured, lends an edgy, sci-fi feel to the story and definitely pulls the package together with an awfully pretty bow.

Creator-Owned Heroes #3 is rounded out with a smart article by Steve Bunche about comic book and film heroines and the flack they sometimes get for being too pretty, too skilled or too whatever. He makes a great point that ” what we get from those areas of entertainment is, again—say it with me, kids—fantasy.” Throw in a couple more opinion pieces from creators, a music piece and some reader photos and you’ve got a comic book stuffed with quality reading material.

I will most likely recommend that you pick up a copy of Creator-Owned Heroes every month, just based on principle, but it’s also a well rounded publication chock full of good, genuinely interesting material. It is very much a ‘creator owned’ labor of love that deserves in many rights to be supported by comic fans. Buy it, read it, share it and tell others about it.