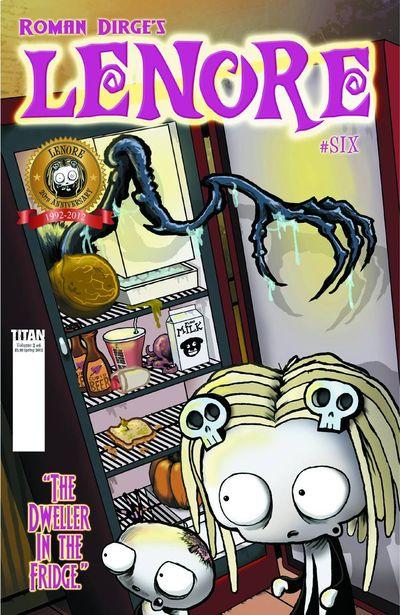 I’m warning you now, with excited eyes and a sharpened blade in my hand, that I am a huge fan of Roman Dirge’s Lenore the Cute Little Dead Girl. However, it’s been years since that last time that I’ve read anything beyond her “Noogies” or “Wedgies” collections. I don’t know exactly what happened. I guess I just figured that something so good couldn’t possibly last for this long, but as Lenore #6 has clearly proven to me, the cutest little dead girl in comics just doesn’t die.

It takes a particular sense of humor to appreciate a Lenore comic. The comedy stems from a dark and sinister place where our inner child giggles at the site of the things we’d find most horrible in our adult years. Murdered entertainers, kitty cats whose cause of death was murder by hugs, and demons in tuxedos are all a part of the fun while reading Lenore. To be honest, I was so relieved when I found myself laughing out loud while reading this book. It felt so good to know that Roman Dirge has not only fine tuned Lenore‘s art design over the years, but has also expanded upon the personalities of her and her friends. The very idea that Lenore has been capering about for 20 years now is not only a credit to its genius, but it also makes me feel really old!

This issue is packed with evil laughs as Lenore attempts to actually bake a cake inside of her kitchen UNSUPERVISED! For those of you who are familiar with Lenore and her innocently devilish antics you are well aware that we should all fear the worst. For those of you who aren’t familiar, this book is a stand alone tale that any reader looking to indulge the more twisted side of their sense of humor can pick up and read. Plus, aside from Lenore running a muck  inside the kitchen you’ll get to visit a multitude of rooms inside of Lenore‘s home as Ragamuffin and Pooty search for the corpse of a dead clown. Ha ha! Yeah, it’s like that.

Lenore is a character very close to my little black heart so of course I’m going to tell you that it’s worth you picking up this comic. Though I’d like to go on the record and state that the humor and contents of Lenore will not ve fore everyone, especially your average comic reader. You know that image of a young kid poking at a dead body with a long stick that always see in comics and film? You’ve got to let that part of you strap on one of those pointy party hats with the pom pom on top and just try not to die laughing. It’s a little immature, it’s most certainly a little sick, but it’s also brilliant in its presentation and delivery of whole family entertainment … provided that that family has been dead for 20 years. Happy 20th Anniversary, Lenore! This is one reviewer who is overjoyed at the prospect of adding more candles to that cake you’re trying to bake … with live squirrels.

* This review was written while listening to the album Riposte by Buke and Gase.