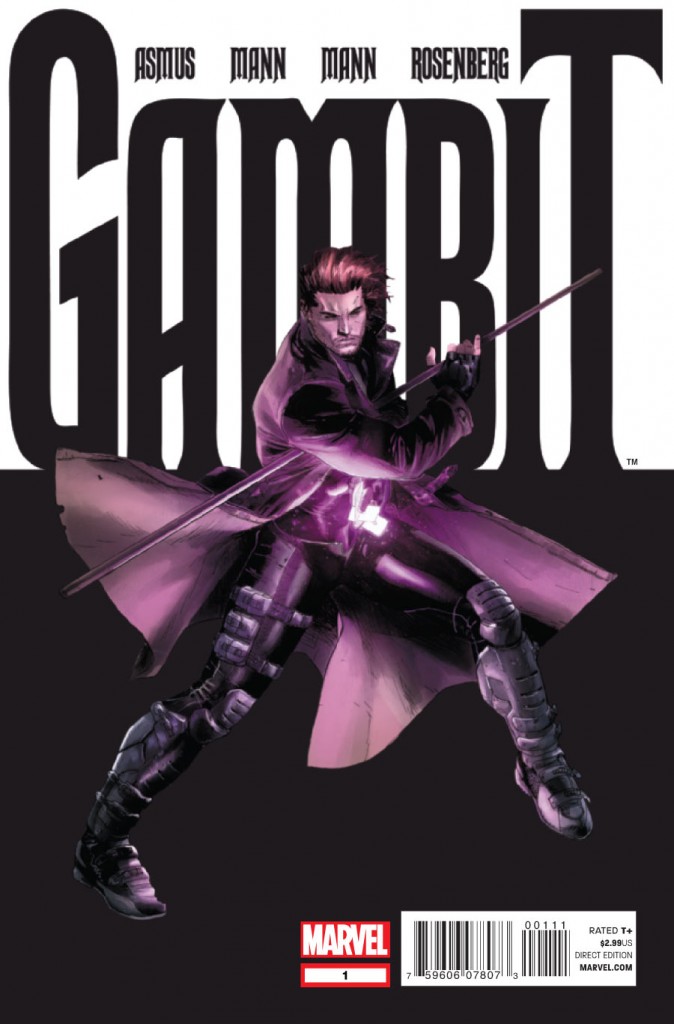 I’ve been enamored with the character of Gambit ever since I first began watching X-Men: The Animated Series back in the 90’s. When you are a kid being “cool” is usually a big deal and Gambit was second only to Wolverine on that scale. After those days I lost touch with the character, as with most of the X-Men, so I was quite pleased a few months back when the new Gambit ongoing series was announced. Well, now it’s here and after reading it I’m left with only one word in my head, disappointing.

The premise of Gambit #1 is a simple one, Remy Lebeau has had a rough couple of years with the X-Men and to recharge his batteries (no pun intended there) he has decided to revisit his roots as a con artist and thief. On the surface the idea of a book about a grifter superhero, especially one as full of personality as Gambit, has the potential to be a whole lot of fun. I instantly had dreams of Ocean’s 11, but with super charged playing cards, running through my head.

The tale of a clever thief leaves room for not only fantastic gadgets, but also highly involved plots and clever interactions. Gambit #1 sees our hero attempting to break into the vault of a wealthy man who bank rolls super villains and steals their gadgets when they can’t pay up. To me this sounds like a gold mine for this type of story.  The problem, however, is that none of the situations or encounters that writer James Asmus puts the character in feel particularly unique. How many times have we seen heart of gold robbers breaking through high security by sneakily acquiring retina scans? We know where this plot is going before it even begins and that might be serviceable, but for a number one it’s just not good enough.

This lack of creative playfulness extends to Gambit himself as he does nothing in this story, save for throwing a high powered toothpick, that couldn’t have been done by any character in any book. Sure, he occasionally talks with a slight Cajun accent, or tries to seduce a young lady for his own gain, but none of it pops in any real way. Remy also lacks any kind of true motivation for his crime, except boredom, which is not a good enough reason to root for any character.

I also found myself unimpressed by Clay Mann’s art which goes for a glossy realism but just comes out feeling stagnant. The characters feel stiff and Mann’s panels feel more like photographs strung together than a cohesive visual story. The bottom line is that when you have a character as agile and dynamic as Gambit, you need the art to mimic that and here the package just feels flat.

Wait and See – I’ve been very negative about the book, but the truth is that all of these shortcomings, save for the art, add up to something more middling than bad. The end of the issue has an interesting twist which could lead to something bigger for our cajun friend, but until then leave Gambit #1 on the shelves.