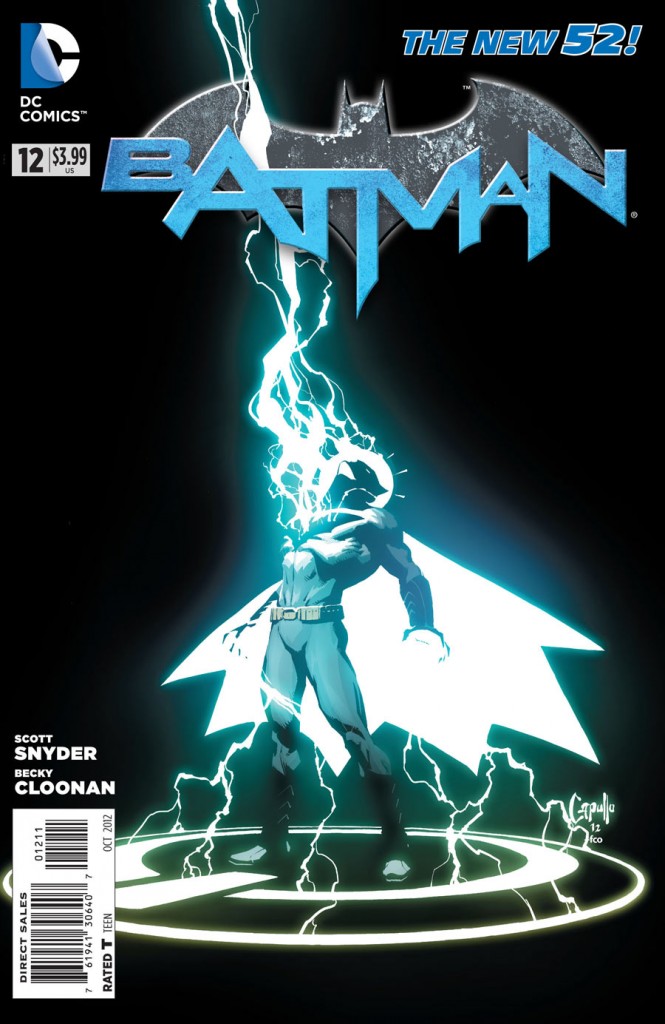 In the opening moments of Batman #7 our caped crusader is saved by a mysterious young woman named Harper, she was a new character, but one that Batman seemed to know. At the time I was put off by this odd inclusion of a new person, who could seemingly track Batman, and who seemed to have had some sort of run in with him in the past.  In fact, in my review I called it, ” …[an] uncharacteristic black mark on an otherwise perfectly structured run.”  Well, it seems now Scott Snyder has made me eat those words, as Batman #12 takes a detour from our regularly scheduled programming, and artist, to knock the origin of Ms. Harper Row right out of the park.

The first thing you should know about Batman #12 is that there is barely any Batman in it. We are instead given over to the perspective of the aforementioned Harper, a girl who is stuck on the bad side of Gotham and who is trying her damnedest to help her brother survive the cruelty of high school.  You see Harper’s brother is gay, and he, unlike Alan Scott in Earth-2, actually feels like some of the real gay friends that I have. The relationship between these siblings is a central part of Snyder’s story and it feels strikingly genuine.  These are good people, living in a bad place, and it makes both of them innately likable.

Harper herself is a hands on kind of person. She works in sewers fixing Gotham’s electrical grid and this kind of do it yourself thinking pervades her entire self.  She is so busy working to keep her life going that she doesn’t see anything more, that is until Batman steps in and does what no one else will, he stands up for those who can’t stand up for themselves. From this moment Harper is a woman driven by an obsession, a desire to help the man who helped her, and in doing so be more than she’s ever been. It’s incredibly satisfying to see such a smart, honorable and engaging character be brought into the DC 52, but I guess we shouldn’t be surprised that it’s coming from the writer who brought us The Court of Owls.

The sewers and Narrows of Gotham City are brought to life in this issue by guest artist Becky Cloonan.  Can you believe she is the first woman in the history of DC to pencil either Batman or Detective Comics?  That bit of trivia aside Ms. Cloonan turns in stellar work here. Her panel layouts are interesting, her character faces expressive, and her depictions of Batman varied. When Harper sees Batman for the first time everything about the Caped Crusader is turned up a little. For instance, his cowl, cape, and costume all look like one black mass, but then later on when she is more familiar with him, there is much more contrast in his attire. The other notable thing about Ms. Cloonan’s art that struck me is its similarity to another Snyder collaborator, Raphael Albuquerque. She shares his penchant for thick lines and large eyes, and it really works well in the dark world of Gotham City.

Buy It – Do I really need to say this anymore? DC couldn’t be doing better service to its most popular hero. This issue takes a step back from its usual main character, but in doing so it gives us the great addition of Harper Row to the DCU. It’s also the perfect time to take a step back and give us a one and done issue after the epic events of The Court of Owls storyline. Scott Snyder once again does a stellar job, but its the art by Becky Cloonan that is the standout. Pick it up.