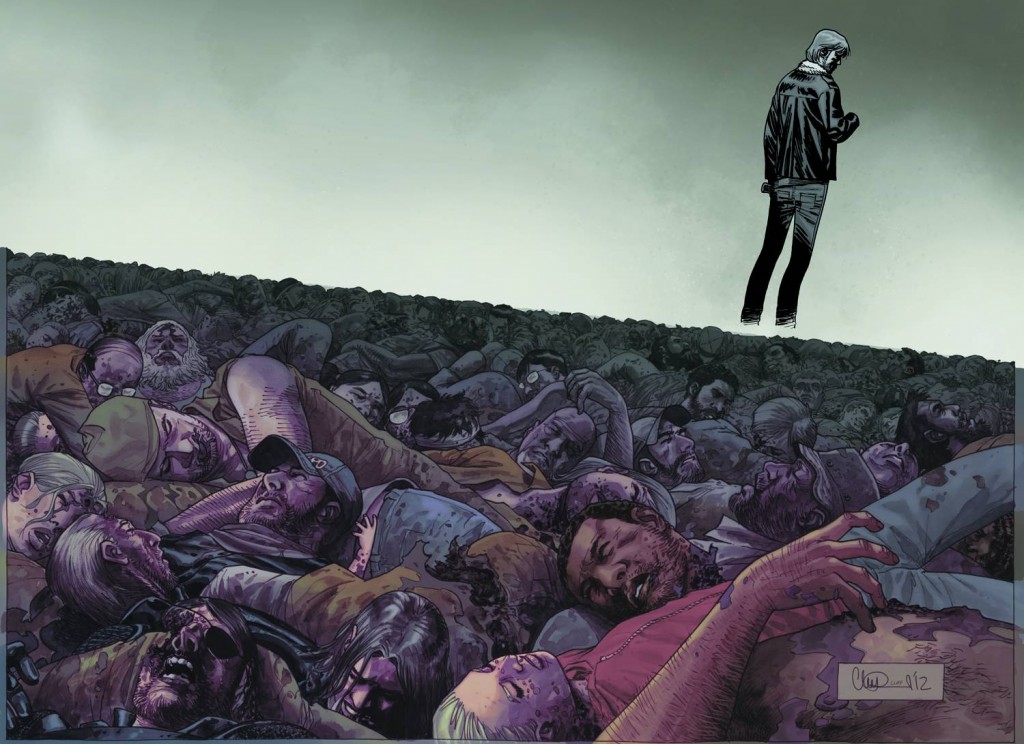 Without question, Image’s The Walking Dead series has become one of comic’s biggest success stories. In addition to the third television season premiering this October on AMC, and new installments of their episodic video game planned to be released throughout the year, it seems the comic has yet another achievement to add to its repertoire. In this month’s July edition of Diamond Comics Distributor’s monthly sales it has been reported that the comic’s 100th issue was the #1 top seller of the month of July, beating out big name competitors and setting a new record for best-selling comic book initial orders originally set in 1997.

The 100th issue is part four of the story’s Something to Fear arc and focuses on Rick and his group squaring off against The Saviors, another group of survivors from the story’s post-apocalyptic reality. Currently, the comic has outsold Marvel’s Avengers vs. X-Men (the second high grossing comic of July) by over 150,000 issues; however, as Diamond Comics’ report only cover the transactions between Diamond Comics and retailers the numbers cannot be taken to be truly reflective of the market.

During a press release responding to the issue’s success, Image Comic’s Publisher Eric Stephenson shared his contentment stating, “This is a remarkable achievement”.  “It’s extremely uncommon, if not flat-out rare, for a comic book to see a sustained increase in sales following its first issue, but The Walking Dead steadily climbed up and up since its launch in 2003, and we couldn’t be more proud of Robert, Charlie and the whole Walking Dead team” Stephenson continued. Additionally, during this press release Image Comics revealed that the Walking Dead’s 100th issue sold a staggering 383,612 initial orders.

Have you read the Walking Dead’s 100th issue? Let us know what you think in the comments below!