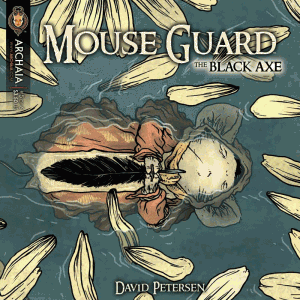 Written and Illustrated by David Petersen

After having finally recovered the Black Axe, what awaits Celanawe at the end of his mission?

This series talks about how Celanawe first got the axe and how it’s history relates to him; both in how the axe was made and why it comes to him. At the start of the story Celanawe is told he’s a direct descendant of the original Black Axe and is put on a mission to rediscover the lost axe. Book 5 of the mini-series deals with the fallout of that mission, having just succeeded in recovering the axe.

I have to say this book pulled at my heart-strings. It’s deeply rooted in the origins of the axe, and why it was forged; in a way it can be seem as something of a curse and responsibility. Later we learn that Celanawe becomes a legendary folk hero among the mice as The Black Axe but the story that makes him that hero is so compelling.

Buy it, then if you haven’t done so buy the Fall and Winter series. Honestly I think this is one of the best epic fantasy comics running. It sometimes takes awhile to hit shelves but the consistency and depth of story are never a disappointment when it does arrive. Not to mention the collected editions are loaded with good stuff. Currently we’re keeping a look out for #6 of the Black Axe series due out in October.