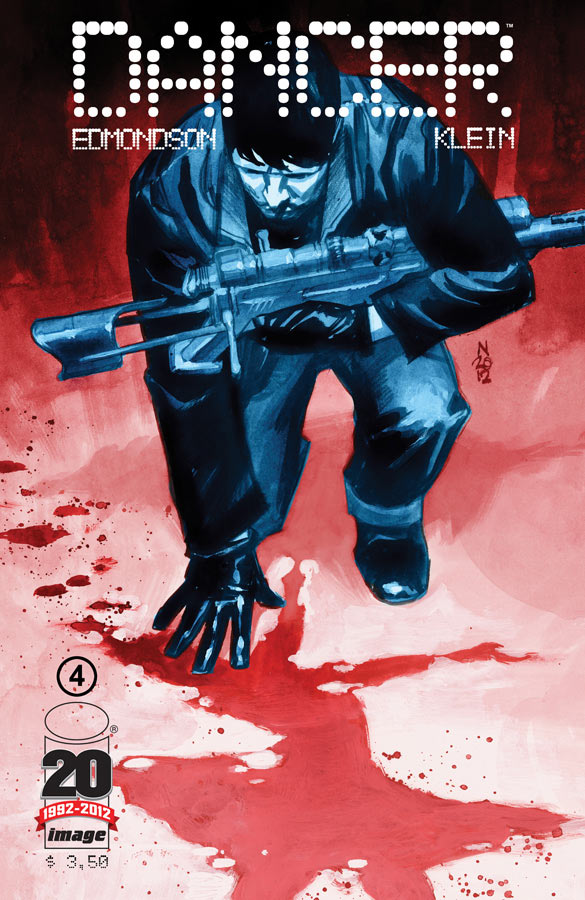 I’m hooked. Absolutely hooked. Dancer #4 is a pulse-pounding piece of espionage-tinged storytelling. I haven’t read issues 1 through 3 (yet), but I was able to deduce that a young ballerina, Quinn, was kidnapped by a “freaking psychopath” with a sniper rifle and that two old spy-thriller veterans, Alan and Fox, are putting together a suicide mission to rescue her. That’s where we are at the start of issue #4, and the entire plan is resolved by the end, with terrifying, explosive, revealing, twist-riddled results. Fantastic. Simply fantastic.

Nathan Edmondson (of Who is Jake Ellis? fame) is clearly an admirer of Bond, of Bourne, and of Brubaker. I bring up Ed Brubaker because Dancer is reminiscent of his seminal work on Captain America and Winter Soldier as well as his creator-owned Criminal series. Edmondson’s script is laced with non-stop grit and action, but also contains a cerebral edge that makes it more than just snipers and snow drifts. The opening scene compares the precision of ballet and dancing with the rigors of assassination and spying. A brilliant extended metaphor that lends this book more emotional resonance than more simple blow-‘em-up action comics. Stunning.

Nic Klein’s artwork is equally moody, doused in deep shadows and furrowed faces. There is an especially impressive double-page climax involving a train, a truck, and a loud “KA-RAKK” that is simply awe-inspiring. Klein’s heavy lines carry echoes of Sean Phillip’s noir-tinged work on Criminal, amplifying the connection between Dancer and Criminal for this lowly reader.

Buy it. This review is short because I want to read Dancer #4 again. I also want to get the back-issues and read those as well. And so should you. Also, I forgot to mention there is talk of clones toward the back-end of this issue. We’re tripping down the sci-fi bend, my friends! Edmondson’s Dancer promises to be a wild ride.

One thought on “Dancer #4 Review”