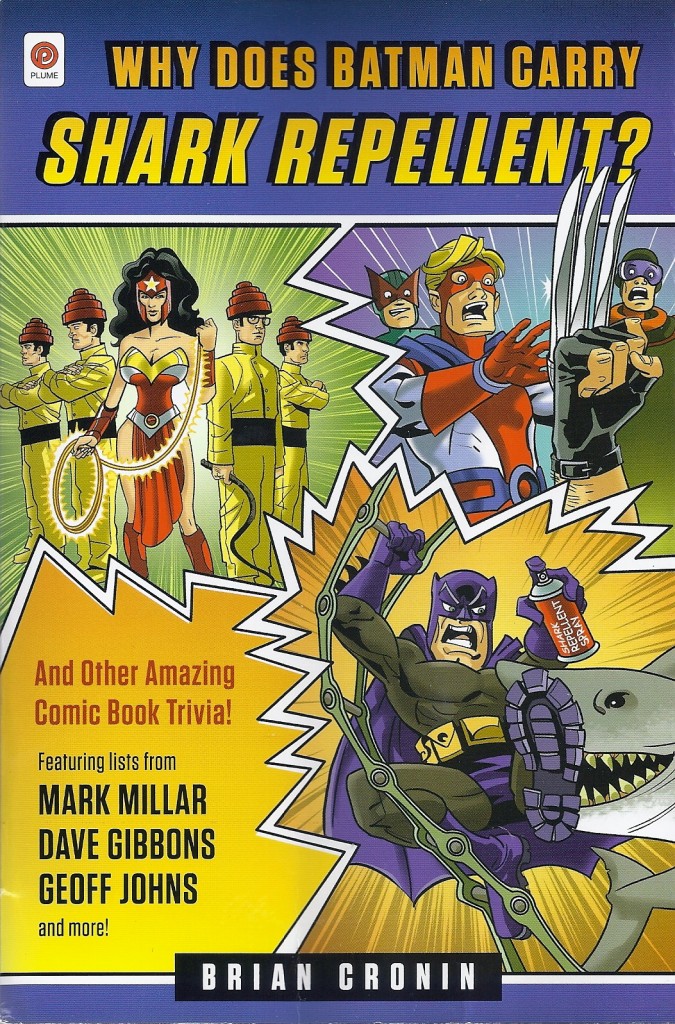 Why Does Batman Carry Shark Repellent? (…and other amazing comic book trivia!)

Brian Cronin has assembled here-in one of those books that you assume must be out there somewhere already, but I think it’s that we all play these things as parlor games, or on-line quizzes, and it starts to get a bit familiar. The fact that this project is an off-shoot of Mr. Cronin’s “Comic Books Should Be Good” blog, and his wonderful “Comic Book Legends Revealed” column for CBR, would seem to make it more so.

That said, this is a book worth every penny of it’s $15 cover price, if only as a conversation starter…well, argument starter, but you know what I mean. The lists are divided into six categories (Characters, Writers & Artists, Storylines, Beyond the Panels, Comics & Culture, and Movies & TV) for easier access, but you’re probably going to want to just jump around willy-nilly, letting your fingers and eyes fall where they may.

The lists themselves, curated by Mr. Cronin, along with “guest-listers” such as Geoff Johns, Mark Waid and Jeff Lemire, among others) are either serious archiving (“Top 25 DC Characters” or “Top 5 Comic Book Creator Runs”), fun fact assemblages (“Three Memorable Characters Who Have Wielded Thor’s Hammer”) or just off-the-wall (“5 Stupidest Super-Hero Origins” or Peter David’s list of “Top Six Characters Known for Sitting Around”).

The humor element is certainly paramount, but there is a great deal of serious comic history told within this slim volume (262 pages), and for those of you new to the comics world, it’s a fine way to be alerted to some of the medium’s finest moments, as well as “Six Ways That Aquaman’s Finny Friends Have Helped Him Out”.  (#2—A whole group of fish performing surgery on Aquaman!)

VERDICT:  This is a fun book to leave sitting on your coffee table, or as someone who saw this in my living room told me recently “This is the best ‘bathroom read’ I’ve seen in years!”  It’s worth buying, and it’s even a better gift to receive!

PS) Little Audrey is reminding me that doctors say you shouldn’t spend an inordinate amount of time en toilette as it’s bad for your plumbing. rrr