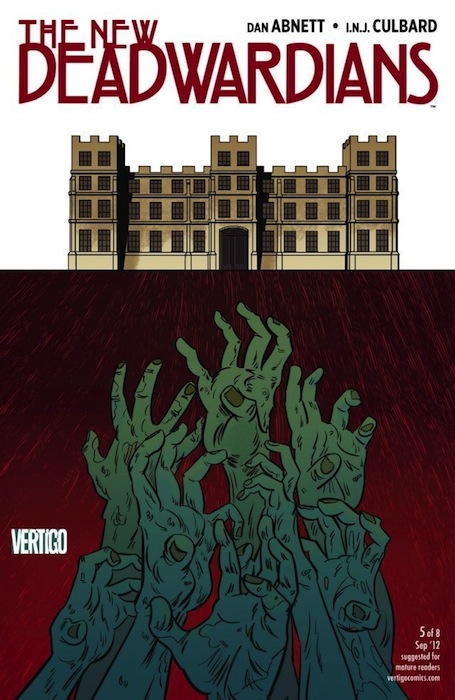 New Deadwardians is a fascinating and unusual title, though I suppose that’s why it ended up at Vertigo. Set in an alternate Britain in the early 1900s, it depicts said Britain threatened by the existence of a plague of zombies, here called “The Restless”. In order to prevent the upper echelons of society from falling prey to the zombie disease, a Cure is administered, essentially turning these upper class members into vampires or “The Young”. Of course this further distances the upper classes from normal humans, or Brights, who even live in a different part of London.

Into this setup comes Chief Inspector Suttle, who gets called in to investigate the death of Lord Hinchcliffe, one of the Young who wasn’t killed by any of the three traditional methods that traditionally kill the otherwise immortal beings. This creates a lot of questions, such as whether the Cure is failing.

In a society so stratified, this is a big problem. In this issue we see Lord Falconbridge express the desire to see this kept quiet. Additionally, we see a young suffragette demand the Cure for young unmarried women. But, as Suttle tells them, the Cure isn’t worth it. It steals away ones desires, even while giving them unlimited time in which to pursue them.

This issue picks up with Suttle going to investigate the heir of Lord Hinchcliffe. There in the dead man’s estate he sees the same symbol that was on the dead Lord’s cufflinks and also burned into his skin. It apparently indicates an old society called The Sons of Adam, though as Lady Hinchcliffe says, it’s not a magical society but a drinking club.

Much of the issue plays out like a traditional murder mystery, presenting us with suspects that may or may not have been involved in the death, though the cause of that death is still unknown. Additionally, it introduces Lord Falconbridge, who has a pocketwatch with the same mysterious symbol and who seems to want to put suspicion onto the new Lord Hinchcliffe.

This is issue 5 of 8 and Suttle (and we) still don’t have much to tell us what’s going on. But for some reason I trust that Abnett has laid all the pieces in place and that the reveal will pull things together. Truth be told, I’m a little sad that this comic will end in just three more issues. Abnett has indicated that he could continue the story past the mini and I’d love to see him get the chance.

If you’ve read this far along in the storyline, odds are you’re in for the whole thing. With its limited run, you pretty much have to read the whole thing, or nothing at all. But if you’re on the fence, this is a great miniseries combining elements of supernatural horror (zombies and vampires) with an alternate Edwardian England, complete with class issues. If you can catch up (and I know that you can at least digitally), it’s a wonderful little series that deserves to be read.