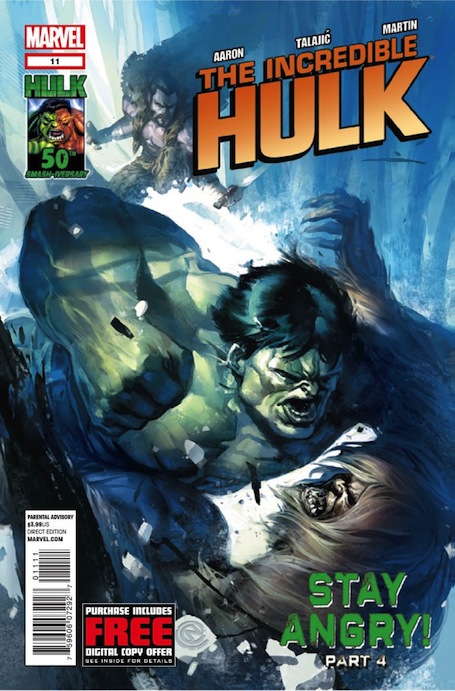 Readers of my previous review of Incredible Hulk #10 will know that I’ve been enjoying Jason Aaron’s current arc on the title, Stay Angry. The setup, having the Hulk playing catchup to Banner’s schemes has been refreshing and he’s managed to sneak in some interesting characters and settings, like hillbilly Atlantis, and an abandoned Russian space station.

This week, Aaron brings us to the forest, and, as seen at the end of the last issue, gives us Kraven the Hunter. Sounds like it can’t lose, right? Unfortunately, this issue felt like a letdown – muddy, rushed and without anything truly interesting.

The Hulk wakes up with Kraven over him and Kraven quickly subdues the Hulk with wires and adamantium fishhooks. Kraven tells the Hulk that he made a deal with Banner, to take him to the hidden city of the Sasquatches.

To this end, he uses a bigfoot as bait. Only when the Sasquatches arrive, Kraven escapes and the Hulk is taken prisoner.

In the end, Kraven reappears and the Hulk makes his escape. Only he can’t quite let the Sasquatches face Kraven alone, so he returns to fight the hunter (if you can call it that).

I suppose what I found the most disappointing was that there’s not much here. Sure, a gathering of bigfoot, yetis, Sasquatches, wendigos and skunk apes seems like a fun concept, but it doesn’t go anywhere. We see them, we see them fight a bit, and that’s it. None of the characters, not even the one who speaks for them, stood out and while Kraven and the Hulk trade a few blows, this wasn’t the knock-down, drag-out hunt and fight that I was hoping for from last issue’s teaser.

There is a sense that we’re nearing the part where we learn about Banner’s ultimate motives, and what he needs all these various items for, but it’s not clear yet. I’m willing to stick with this for the payoff (which I hope is worth it).

This issue seems to be a rare misstep in the Stay Angry arc. I’m willing to give Aaron the benefit of the doubt and let this one slide, but I’m hoping for a return to form in future issues. Worth it to keep up with the current arc, but you could probably skip it entirely and still be able to appreciate the arc’s resolution.