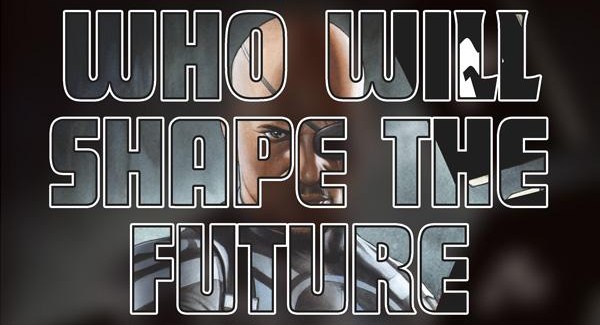 (Read this as a shudder!)

As regular visitors to Talking Comics know, I’ve been reading Marvel comics since Fantastic Four #5 in 1962, virtually their entire history under that corporate name. The stories told by Stan Lee, Jack Kirby, Steve Ditko and those that followed in their footsteps provided me with examples of heroism, self-sacrifice and humanity that would help to shape me as a person, much as the mythology of ancient times did for the children of those eras. It is with much sadness then, that I’m digesting the information, spotty as it is to date, regarding the “Marvel Now!” initiative slated for later this year.

At the San Diego Comic-Con, during a brief TV interview with G4, Marvel big-wig Joe Quesada pointedly said “This is not a reboot!”, trying, I’m sure, to distance himself and his company from the continuity-killing miasma that is “DC’s New 52”; of course, this statement was followed by the usual talk of “new #1 issues” and “jumping-on points”, which belie the notion that this is a story-driven event, but is instead a marketing decision; another attempt at shoring up the weakening infra-structure of the continually shrinking comic reader fan-base.

Mr. Quesada’s slice of flummery and ballyhoo did nothing to alleviate the pervasive malaise that had overtaken me since reading of Marvel’s intentions to cease publication of many of their core titles, re-starting them with a “more cinematic feel”, which will certainly drive the huddled masses of “Avengers” movie ticket-buyers immediately and in toto into the comic stores. (Sorry for the sarcasm, but it is warranted.)

This unease affected my entire week’s reading. Books that I’ve always plunged right into, I found myself closing up after a cursory glance at the splash page, thinking “Why bother? I know where this is headed”. By Saturday, I managed to slog through my weekly haul, and even managed to stir up some passion for Kelly Sue DeConnick’s Avenging Spider-Man and Alan Davis’ Fantastic Four Annual, but it was a transient, muted feeling at best. Those of you who are devotees of our program know of my enduring affection for this medium and it’s iconic characters, so my dis-quiet may take you as aback as it has me; but let me implore you, Gentle Reader, to not allow my disillusionment to influence your opinions on books or genres that you love; remember that I’m a curmudgeon with a long memory, and I can only speak for myself, and my rapidly growing sense of déjà vu.

This is quite reminiscent of the Heroes Reborn debacle of 1996-7, when Marvel’s market share began to slip, and they contracted Jim Lee to “Image”-up the Marvel Universe after the “Onslaught event”.  Six months or so into this experiment, with sales figures up, but criticism of things such as “bendy, pose-able” Sue Storm and rhino-necked, pointy-chinned Captain America on the rise, Marvel announced (and “Hey, I’m paraphrasing, here!”) “It’s only for a year, people—relax. We’re going to have Peter David fix everything, don’t worry”—sort of sounds like the Mayor of Amity Island just before the shark attack, doesn’t it?

As hard as it may be to believe, I had stopped buying the core Marvel titles, having sampled each of the new creative teams, but finding nothing to hold my interest, I abstained from purchasing; though as full disclosure, the announcement of the re-re-boot drove me to purchase the 6-or-so issues of Fantastic Four I had missed, in order to not create a gap in a thirty-five year collection—what a waste, right? However, starting with Mr. David’s clever use of Franklin Richards in Heroes Return, and with some fine books coming in that series’ wake (Alan Davis on FF, Perez on Avengers), one could feel our concerns were being addressed, and it was easy to be hopeful for a long-term future as Marvel readers.

Well, to paraphrase old-time NFL coach George Allen, “The future is Marvel Now!”   I will endeavor to follow my own advice (see “How to reclaim a sense of wonderment: An elderly perspective” elsewhere on this site) and read these books with as open a mind as I can muster up, as there are talented creators, whose work I respect and admire toiling on these projects, but I have come to realize that not only am I not the target audience anymore, I’ve been identified as part of the problem.

My generation of readers embraced the inter-connected and long-running Marvel continuity, and fell into abiding by a sliding time-scale (The FF were created 10 years before whenever you were reading the book) to dismiss anachronistic inconsistencies created by the long publication history. We did demand, however, consistency in characterization; that the process of growth be organic, stemming from the previously established continuity, and not from some corporate “edginess mandate”. We long-time Marvelites, who supported this once-“little company that could” throughout the years, have become a pecking albatross around the company’s neck, nit-picking minor details and critiquing the larger issues in print or on-line. On that basis, Marvel is better off without the static created by us, the “nattering nabobs of negativism” (thank you, Spiro Agnew!), and the “Now!” move should begin clearing the decks for the next generation of fans.

The problem is, as always, one of attracting new customers at the bottom of the sales pyramid. If this ploy does, by some happenstance, create an influx of new readers, particularly pre-teens, then this trade-off of old-for-new was well worth it, and I’ll take my exit and retreat to my archives, where my heroines and heroes still exist in the forms that I came to cherish, and that I can still whole-heartedly embrace without the merest hint of apology or self-consciousness, and I’ll leave the field to you whipper-snappers.

At present, I’m finding it difficult to work up any enthusiasm for another round of over-hyped “cross-overs” that will take an inordinate amount of time to complete, fill an entire box in my library alongside all the other “events” that never get looked at, and which feature characters that display few of the traits that made them iconic in the first place. I guess we can attribute this “progress” to the business aspect of publishing comics, more so than the nature of the story-telling demands of this new “age”.

[Should we call this the “Cubic Zirconium Age”, as it resembles something of great value, but doesn’t contain the same substance— little Audrey wants to know!]

As we speak (or rather, I type), my emotions are running a bit raw, and due to my life-long attachment to many of these characters, it’s probably going to be harder to walk away than I can imagine, particularly since that even after all these years, a smartly-written, well-drawn comic can elicit a deep emotional response from me quite unlike any other medium. The converse is also true; an abysmal book can get my blood boiling as quickly as anything…and speaking of which, have you seen that horrendous cover for Catwoman #0 !

I’ve complained (O.K., ranted) a bit here, but this in no way negates my appreciation of Marvel’s colossal achievements, both past and present, in this industry, or that I will ever feel anything but joy in pulling out my older books, making myself an egg cream, and curling up in my favorite chair for a good afternoon’s reading, but moving forward, I’m experiencing the anxieties of a scorned lover, and Marvel is going to have to work very hard to regain my trust and affection. This means you, Jonathan Hickman & Matt Fraction!!

PS) If my sour mood doesn’t improve, and if I can’t recapture my passion for purchasing mainstream comics (DC having mostly lost me with “The New 52”), perhaps it’s time to “thin the herd”?  Anyone up for a yard sale?  rrr