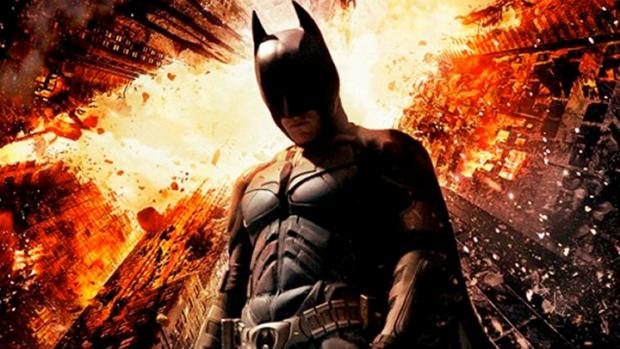 [Editor’s Note: The following article concerning The Dark Knight Rises contains major SPOILERS for the film. If you have not seen it yet, please do not read on. This will be the only warning. Enjoy!]

That being said, the buzz is higher than ever for this ultimate entry in Christopher Nolan’s Batman saga. One friend of Talking Comics asked “Best Batman movie ever, or Best Movie Ever?” It’s understandable for the anxiousness to be elevated for an event like this – after all, it has been four years (almost to the day) that The Dark Knight opened and blew away all expectations of what a superhero movie – hell, any movie – could do.

I went into The Dark Knight Rises excited, but not as much as I was for The Avengers earlier this summer (you can read my explanation here). But as the lights dimmed in my midnight showing, I started to get giddy. I felt excitement surge throughout my body, and I was ready.

Then I lost all of it.

During the film, I felt myself questioning and bickering throughout it. Why did this happen? Why did that? That doesn’t make any sense. That’s stupid. These thoughts permeated my brain and sullied my moviegoing experience. It makes me wonder – are we lending too much credence to the idea of “hype?” If this had been any run-of-the-mill summer tentpole, the gripes and concerns I had would not have been so many nor would they have hindered my ability to enjoy the movie. But this is Batman. This is Chris Nolan’s Batman. This is it.

I walked out of the theater deflated. I knew I had just seen something spectacular, but I couldn’t feel it. I had questions that bothered me, and I’m usually a much more laid-back viewer who doesn’t question things too much if the ride is good.

So I wondered – why is Alfred giving Bruce (and us, duh) exposition on Bane? Where did Bruce’s limp come from in the first place? How does everyone know who Bane is but nobody can find him? Where the hell is this prison? How the hell did Bruce get back to Gotham? It’s an unfair to compare this film to The Avengers  — they have one thing in common, and that’s that they  are superhero movies – but it is quite fair to compare it to its predecessors, Batman Begins and The Dark Knight. Those movies I find relatively flawless, and they play exceptionally every time for me. Sure, I may feel that the Harvey Dent/Two Face section of the latter feels a little rushed and unearned, but it’s completely forgivable and, once again, the ride is not affected. But too many things took me out of The Dark Knight Rises. I wondered why a bomb that could go off in “five months by my count” would have an exact timer associated with it.

I hated that Bruce, when he (somehow) arrives back in Gotham, had the time to paint the bat symbol with gasoline (poorly, I might add) when there were hours left to save the city. I hated that while Batman’s death is extremely high profile, Bruce’s is non-existent. He, much like Talia, dies for no reason. But most of all, I hated that I didn’t love the movie. I hated that all these nitpicks and distractions ruined what love I may have for it. So, I did the only thing I could think to do. I went back.

Watching the film again, without the constraints of preconceptions and without the daunting task of a three hour event ahead of me at midnight (it was a struggle), it held up much better. All I wanted to do was sit down in the theater and let the movie play and watch it like a movie, without analyzing every detail to end after annoying end. I’m happy I did this, because fewer things bothered me. I paid better attention. I was engaged a bit more thoroughly. Alfred gives us exposition on Bane because Bruce asks him to, and he is part of the Batman detective machine. He always has been. The timer on the bomb didn’t irk me at all this time (with the exception of Talia’s line of Gothamites having “eleven more minutes.” We know that detail — without looking at watch or a clock, she shouldn’t be that exact) and the feeling of time and space worked much better.

For instance, Bruce tries to get out of the pit three times and fails twice. I felt that this sequence of events went on forever, but in truth his second and third attempts are within minutes of each other onscreen. Am I still ticked off by the Batman Street Art Gasoline Project? Sure. Does Talia’s (and Foley’s) death seem a little silly? Yeah. Did I enjoy it a lot more? Absofreakinglutely.

Hype is a dangerous thing, one that can hamper one’s ability to fully appreciate or revere something that is up on a pedestal. I have yet to venture out to IMAX, but when I will, I’m fairly certain that The Dark Knight Rises will be cemented for me as the weakest entry in the trilogy, but that doesn’t mean that it’s a bad movie. I’m happy that I can now say this, and much like Bruce, rise up out of the pit of uncertainty.