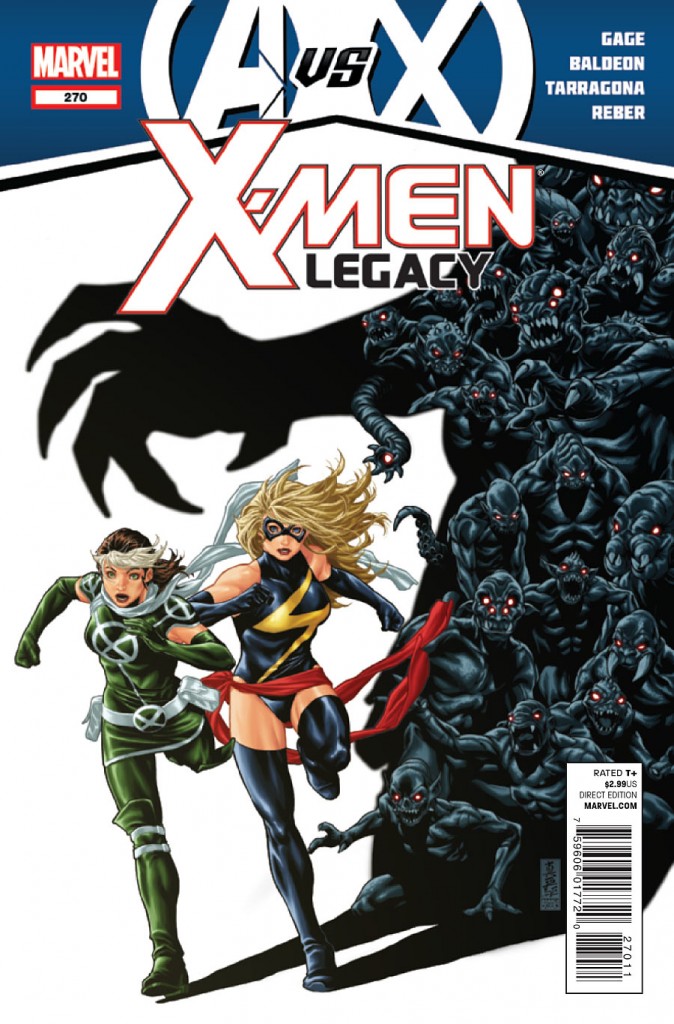 As the stakes in AvX rise, we start to see side characters make difficult decisions. X-Men Legacy features Rogue, an X-Men who has taken leadership responsibilities and grown significantly in recent years. Issue #270 continues her encounter with Ms. Marvel, and Rogue is faced with some tough decisions as she strives to be a good person and righteous leader.

Where we last left off, Magik showed up on the scene and thanked Rogue for capturing Ms. Marvel. The two just had a heart-to-heart (with some fist-to-face, foot-to-stomach, head-to-head…) that revealed Ms. Marvel’s concerns about the Phoenix Five. Rogue, who ultimately respects Ms. Marvel, listened and grew concerned. With the power of the Phoenix Force within her, Magik brought a little piece of hell to earth: a fraction of Limbo serves as a prison for captured Avengers. At that point, there was nothing Rogue could do to ensure Ms. Marvel’s safety. Rogue’s choices in this issue could ultimately shape the AvsX conflict. Should she stand back and accept this inhumane prison as a part of war, or go against her friends and teammates to break the prisons out of their worst nightmares?

What makes this issue a great piece is that it shows how Rogue views the world. She doesn’t see things black-and-white; there are shades of grey to this whole conflict, and she had the chance to listen to Ms. Marvel’s take on the Phoenix Five. Rogue respects Ms. Marvel, and by the end of the issue it is obvious she values Ms. Marvel’s warning from the previous issue. Additionally, Gage gives us a glimpse into what it takes for Rogue to absorb someone’s powers. It’s not a simple touch, but a struggle in which she must assert herself and conquer her own demons.

If you have been keeping up with AvX, this is a must-read. Usually in crossovers, I’m more interested in what minor characters are doing to impact the overall story. That’s where you see great storytelling and more complex views of the problem. Gage writes a good Rogue, even keeping her accent heavy and charming. The interactions between Rogue and Ms. Marvel warm my heart. It’s nice to know how far characters can go and the forgiveness they can show each other. Issue 270 is a great addition to the AvX story.