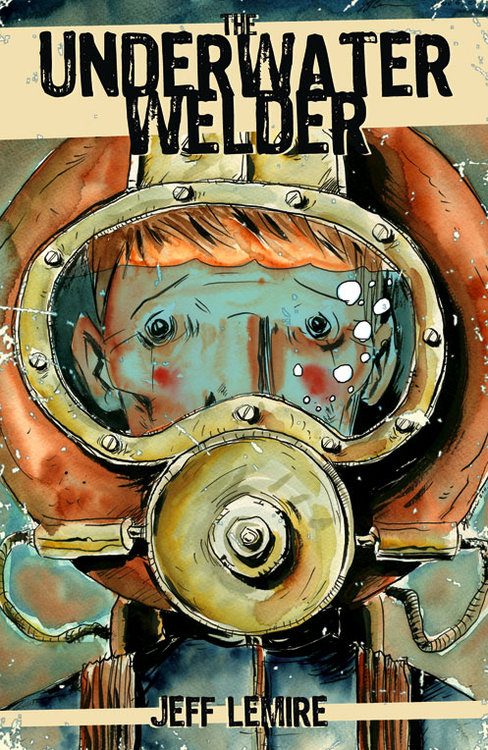 I have made no secret of the fact that I love the work of Jeff Lemire, so it may come as little shock to anyone reading this that I’m enthusiastically recommending his new book. In fact, if you are wise you will all stop reading this review right now and go out and get The Underwater Welder in any way you can. You will notice that I’m not going to talk much about plot in my review. That’s not because it’s not engaging and fascinating, which it is. Instead it’s because, to me, this book is more about feeling, about the way a boy becomes a man, and about how our personal relationships shape our lives.

Every inch of The Underwater Welder belongs to Mr. Lemire, and this kind of clarity of vision brings to mind a word not often used in the comic book world, auteur. For those unfamiliar with the term, it refers to a film director whose authorship of a film, from the script to the screen, is absolute. You could take the credits off a Woody Allen, Christopher Nolan, David Fincher or Quentin Tarantino film and you would still know instantly who was responsible for what you were watching, and the same goes for the work of Mr. Lemire.

His art, whether it be here, Sweet Tooth, or Legends of the Dark Knight, is deceptively simple. On the surface one could mistake it for unpolished or sloppy, but nothing could be farther from the truth. The pencils in The Underwater Welder are certainly raw, but this only serves to enhance the feeling of emotional connection to the people who inhabit its pages. Lemire’s characters, with their slightly elongated faces, large expressive eyes and spindly bodies, feel as real, if not more so, then any “realistic” portrait could.

In Jack Joseph, the titular Underwater Welder, Lemire has crafted a human being who we as readers can genuinely care about. Jack isn’t perfect, he’s a little selfish, self destructive and immature, but it’s those very things that make him a man we can all relate to. The Underwater Welder is Jack’s journey, both physically and emotionally, and it’s rife with big universal ideas made strikingly personal.

This is a story about fathers and sons, about growing up and about letting go. More than anything, its about the bittersweet nature of childhood memories and how they can often be as damaging and alienating as they are precious. I found myself profoundly moved by how honestly Lemire tells this personal story, perhaps because it’s something I can identify with very closely.

We all hold on to things, idealized musings of days gone by, or out dated dreams of how life is supposed to be, and these things can often run our lives more than the people and relationships we have in the right here and right now. I love the fact that this book causes me to think on these things in my own life, and take stock of what is really important. The most beautiful thing of all is that Lemire doesn’t paint this conundrum as negative, but rather as a stage we all need to go through. His Jack Joseph is self possessed, in charge of his own destiny, and because of that, the book is imbued with an uplifting sense of hope. It’s the mark, not only of a great comic, but a great work of art.

The Underwater Welder opens with an introduction from Lost writer Damon Lindelof who calls it, “the most spectacular Twilight Zone episode that was never produced,” and this is as apt a way to describe the haunting nature of Jeff Lemire’s work as anything I could come up with. This book, like all great episodes of Rod Serling’s show, is a parable on the consequences of our actions and like the Twilight Zone, it is required material for anyone and everyone.

Buy It – With The Underwater Welder, Jeff Lemire continues to cement his place in the pantheon of  great modern writers. His ability to make the reader care about a flawed man like Jack Joseph is a testament to his abilities as both a scribe and an artist. The Underwater Welder is engaging, emotionally effecting and sometimes frightening and you owe it to yourself to take in all of its 244 pages as soon as possible.