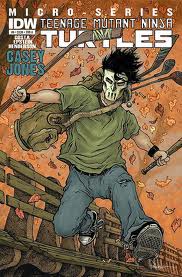 The spotlight flashes on the hockey mask wearing friend of the turtles in this latest issue of the Teenage Mutant Ninja Turtles Micro Series. Even though the first four issues of the micro series aren’t as good as the main series, I’ve still enjoyed them.  Last month, issue five made up for what was lacking in the first four and issue six continues that trend with its focus on the fab green machine’s adopted brother Casey Jones.

Casey Jones is closest to Raphael and the issue begins with them on one of their regular patrols doing what they do best, kicking butt and taking names as they protect the innocent from the thugs and other crooks on the streets of New York. That’s the fun part of Casey’s night, the not so fun part is when he comes home to his alcoholic father who’s verbally and physically abusive towards him.

Without spoiling this issue for you, it basically reveals a little bit about Casey’s past and a promise that he’s keeping for his mother. It’s a powerful and emotional story and I thought Mike Costa and Ben Epstein wrote it well. The art is different from what we’ve seen previously in the micro series and I think it’s great. It expresses the darkness of not only the night and the alleys in New York but also of the inner and outer turmoil that Casey deals with on a daily basis. It also shows that there is light to combat the darkness-whether it’s Casey and Raph going on patrol or Casey holding fast to the promise he made to his mom.

Verdict:
I thought that this was one of the best out of the micro series, definitely worth picking up. It’s a nice and interesting change of pace to read about Casey instead of the turtles. I wonder if they’ll do a book on April.