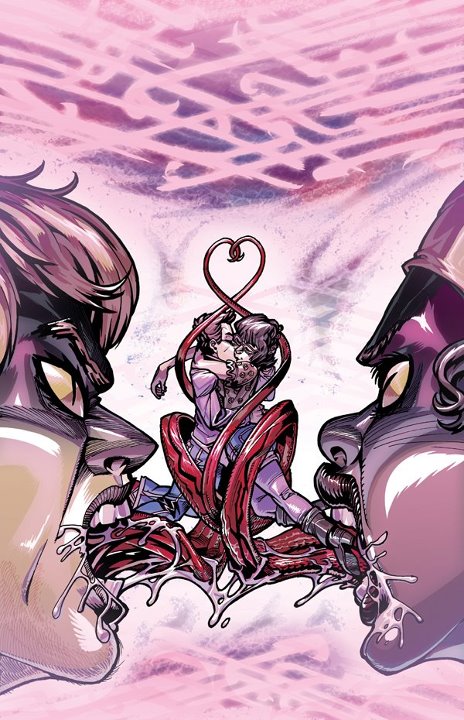 Last month my enthusiasm for Grim Leaper started to diminish. Ella’s personality was revealed to be a bit more crazy and reckless than I had hoped to see. It really made me lose all feeling for the character. I understand the predicament they are in, but blind carelessness for the well-being of those around you isn’t ok.

In Grim Leaper #3 it’s almost like we see Ella switch personalities as well as bodies.  Her adrenaline junkie madness has gone by the wayside, and we see a side of her, and Lou too, that really makes the characters more likable. They have troubled pasts and, for the most part, regret who they were before their untimely deaths. We get some history on both characters in this issue, and our love birds share more in common than previously thought. I thought for sure that it would play heavily into the finale of the book next month, until Wiebe gives me the twist I have been waiting for. It’s not something I expected (at all), and sparked my interests for the next issue.

Art is never a deal breaker for me. I can easily look past styles I don’t like if the story is good enough (Grim Leaper has been so far). It’s known that the art of the book isn’t really to my liking. It is with this chapter I finally realized just what turns me off about it. I am not a fan of the coloring. The book can take liberties at times with just what color gets put where. It doesn’t have to be congruent with previous pages, and it can almost confuse you at times. Between the inconsistent portrayal of the world in the book and the many leaps our characters have made, I can’t give a proper description of what Lou’s host looked like in this issue. It may not be a problem to some, but it bugs me that I leave a book without a proper mental image of the protagonist.

Along with my feelings for the actual story in Grim Leaper #2, I didn’t find myself fond of the back-up either. Grim Leaper #3 continues with the disturbing trend of the previous installment. It follows a man who has fallen in love with Siri (the AI app on Iphones). Obviously, the man has issues, and that becomes more prevalent as it progresses. The thing I liked so much about the original back-up was the fact that it was so different from what Grim Leaper was giving us. It was just a nice serendipitous tale of how two people met. It wasn’t anything supernatural or crazy. Just love. I would like to see that return in #4.

My gripes with Grim Leaper #3 are minimal. The twist was better than expected, and I truly have no clue as to where this story is headed. That’s a good thing. If you aren’t previously invested this isn’t a good place to start. But it’s worth catching up on if you’re in the mood for a love story with supernatural elements.