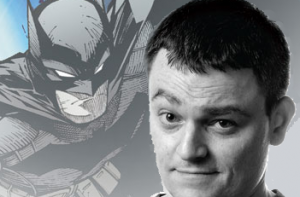 A friend and I had a very interesting conversation not long ago about the nature of writers in the comic book industry, and how they were able to craft their own stories around already established characters and mythoi. My friend asked the question, “What’s the difference between a fan fiction writer and a comic book writer?” Thinking about it, I couldn’t really come up with a good answer, considering that more or less all of the writers today aren’t the original creators for the characters. For me the line of thought ended there until I heard Scott Snyder give a very interesting piece of advice during San Diego Comic-Con he got from another prominent writer that might support that fan fiction writers are the real deal.
Coming off of the first 11 issues of Batman I had to ask Snyder how he got his unique take on Batman and other stories, modeling them to his own vision. He replied,

I was going to start Detective, and I was going to use James, Jr., and I met with Grant Morrision for the first time at San Diego at this con. I guess it was 2 years ago and I told him my idea for Detective with using James, Jr. and he was so encouraging about basically explaining you have to blaze your trail, as though you are writing for yourself and imagining no one is reading it and you’re just a total lunatic writing fan fiction and it’s not comics whatsoever. And for me that’s what it’s about, it’s about trying to do it in such a way writing your own favorite Batman book at that moment, it might not be the best, it might not be the smartest, the darkest or the most action packed but it’s the one you would enjoy the most picking up ont he stands and in the way you try and keep that as your compass and for me that’s what keeps you grounded as a writer.

I was very pleased to hear of Morrision giving that advice, and it gave me a new perspective on fan fiction writing. The idea of fan fiction writing reflects a larger theme that the best writing is often the writing we do for ourselves, and getting others to read the work is a different matter all together. I’ve heard that sort of message repeated often among other writers giving advice on why we write and who we write for. Fan fiction writers tend to write entirely for their own satisfaction, often against the grain of the given conceptions of an established character, and sometimes produce work that would rival or surpass the current, “canon,” because they are so heavily invested in the characters and aren’t constrained by editorial controls.

If this is the case, and the line between fan fiction writer and comic writer is blurred, where are all the new talent to be found? Moreover, how do we get them into the game?

Favorite Comic Book Covers of the Week: 12/12/12 A weekly column by Steve Seigh…