This contest is now closed and the winners of the contest are:

——————————
On July 3, the rebooted Spider-Man movie, The Amazing Spider-Man is set to hit theaters. Marvel has recently had an amazing run as far as movies go with The Avengers and it looks like they’re hoping to make this summer extra epic by bringing us a Spider-Man movie that really does Peter Parker and company, justice.

Taking up the role of Peter Parker/Spider-Man is Andrew Garfield, who is joined by Emma Stone, Rhys Ifans, Martin Sheen, Denis Leary, Sally Field, Embeth Davidtz and more. And bringing the film to life is (500) Days of Summer director Marc Webb. Coincidence that his name is Webb? I think not. More like FATE.

To help get you excited for this amazing movie, Talking Comics have teamed up with New Era Cap Co. to bring you a pretty swanky giveaway. We’ll be giving away THREE Amazing Spider-Man hats and you could be the proud owner of one.

How do you win? SIMPLE.

What’s next? Nothing! That’s it! Tell your friends and family all about the contest and make sure you check back with Talking Comics for more awesome contests! We’ll announce the winner of the contest on the podcast… so make sure you stay tuned!

The rules? You MUST be a US resident with a valid mailing address. The winner must respond to our email within 72 hours or a new winner will be announced. The contest closes on Sunday June 24 at 12:00PM EST. 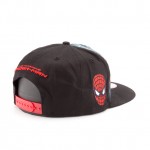 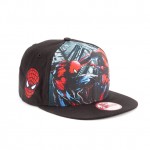 By entering the sweepstakes, entrants agree to release and indemnify New Era Cap Co., Inc. and its agents, successors, assigns, employees, officers and directors from any and all liability whatsoever arising out of or in connection with the sweepstakes.