A year ago, a colleague of mine and I did a research study in our local comic book store. Nothing too demanding or too involved, just a project for our graduate class. We sat in our store and watched how men interacted with women and other men. Simple. What we found surprised us.

Granted, there are a lot of factors that play into this study. One store, about half a year’s worth of data collecting, and observer bias. I am well aware of this, but the research is not the point I want to make here.

When I read Bobby’s editorial letter, I couldn’t help but think of my mom. This woman made the trek to her local comic book store every week with three young kids in tow to pick up her Superman, Batman, and Catwoman issues. My brothers and I would wander around the store, grabbing random issues and begging her to buy them for us (apparently, my little brother had a thing for Vampirella, to my mom’s embarrassment). Even though I was very young, I still remember visiting the comic book store and getting my first issue of Supergirl. 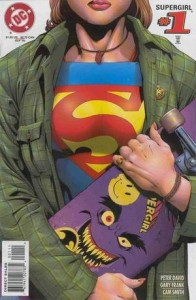 What I didn’t know at the time was the comic book store’s impact on my mom. Years later, she told me how she felt ignored and discounted by the other patrons and the employees. She didn’t fit the regular customer mold. Young, female, thick glasses, scrunchies, and three kids. No one recommended books to her, no one spoke to her, yet she still kept coming back because she was into comic books.

I can’t imagine what it would’ve been like if the comic book store was welcoming to my mom. She probably would’ve bought more comic books. Maybe she would’ve felt like part of a community. Regardless, she knew she didn’t belong.

For the record, it was my mom who got me into comic books. She bought my first issues for me, shared her collection with me, impressed me with random facts about Batman, and watched nearly every DC- and Marvel-related cartoon show on Saturday mornings.

My mom introduced me to this fascinating world, one where I could learn the struggles of mutants, contemplate what I would do if ever orphaned, and decide if I was more of a Betty or a Veronica. Female creators, like Gail Simone, Amy Reeder, Sana Takeda, Marjorie Liu, and Kelly Sue DeConnick grew this passion. I sought their work out, proud of what women in comics can do.

It’s about Janna O’Shea, Jill Pantozzi, Zoe Gulliksen, Stephanie Cooke, and  Sigrid Ellis. Women into comics. Women who will read what they want to read despite what others might think. Women who bravely venture to their comic book stores even if other patrons don’t think they belong. Women who put comic books in the hands of their children and say “How do you feel about dressing as Batman this Halloween?”

I urge you to remember that no one has to prove their geek cred to buy comic books. Remember that women fight for their favorite female characters. Remember that there would be no women in comics without women into comics. Remember that every fan, male or female, has something to add to geek culture. Value every one. Take time to get to know them. And, for Pete’s sake, don’t be a jerk and not talk to a woman in a comic book store.