Wonder Woman, the most famous super-heroine of all, has her beginnings in the most explosively creative era in comics, the Golden Age. Her origin, told in a text piece in All Star Comics #8 (12/41), would be quickly followed by her true debut in Sensation Comics #1 a month later, and her own title that Summer, a book which at it’s peak was selling 2.5 million copies a month!

Fewer people know that the Black Canary nearly matches Wonder Woman’s longevity, first appearing as a supporting player in a “Johnny Thunder” story in Flash Comics #86 (8/47), before eventually ousting him from the book, and taking over as the back-up feature to Jay Garrick’s “Flash”.

With quite a few other long-standing heroines having their roots in this period of comics, one filled with experimentation and imagination (as well as a fair bit of imitation!), let’s pull back the curtain of time, and take a look back at some of the Golden Age’s most interesting female heroes.

Sheena, Queen of the Jungle was the first female character to star in an American comic book title, Jumbo Comics #1 in 1938 (just 6 months after Action Comics #1), and the first to headline her own book, with Sheena #1 beating Wonder Woman #1 to the racks in 1942. She would inspire numerous copy-cats (Nyoka, Rulah, Jann of the Jungle…), but none could ever surpass the original’s high standard of adventure, or Sheena’s toughness in the face of danger. Unfortunately, she couldn’t survive the Wertham-led witch-hunts of the Fifties, and is now mostly remembered for a terrible 1984 movie. Much better fun is the 1955-56 TV series, starring the statuesque Irish McCalla, which is readily available on DVD. More importantly, though, seek out the Devil’s Due Publishing reprints of the comics.

April 1941 would see the initial publication of the first major costumed heroine, Miss Fury, in the pages of newspapers around America. (These strips would be collected and printed as comic books by Timely, and sell over a million copies an issue!) Socialite Marla Drake would don a ceremonial panther skin catsuit (long before Catwoman—or the Black Panther) and take on injustice, Nazi spies and all manner of adventures. Miss Fury’s creator, the stunning Tarpe Mills, was one of a handful of female artist/writers of the time, and imbued Miss Fury with a sense of purpose and individuality that now seems prescient of the yet-to-come Women’s Movement. Our special guest, Ms. Trina Robbins, has selected a series of strips, and written an introductory historical essay for a marvelous hardcover collection published by IDW.

The first costumed heroine created specifically for comic books was The Black Cat, who debuted in Harvey’s Pocket Comics #1, (8/41), before moving on to Speed Comics, and eventually her own title in 1946. The Black Cat was Linda Turner, Hollywood star and former stuntwoman, who dons a disguise to investigate Nazi activity on a movie production in her origin tale by Al Gabriele. Ms. Turner’s stunt background, and knowledge of Judo (in later years, artist Lee Elias would include pages of self-defense instructions in many issues!) would make her crime-fighting activities plausible, and her adventures would continue, in an on-and-off fashion, until 1963. Sadly, there are no HC or TPB collections available, but there was a small-run 10 issue set of reprinted comics done in the early 90s that is quite affordable, as well as a newly-released Kindle edition of Black Cat Comics #1.

Currently a DC character due to their acquisition of the Quality Comics properties, The Phantom Lady first appeared in Police Comics #1 (8/41), though without an origin story. (DC has since done their usual umpteen ret-cons and re-boots to provide her one, along with a connection to the Golden Age Starman.) Sandra Knight, daughter of a U.S. senator, would fight crime wielding a “black light projector” to incapacitate her foes. Phantom Lady would move post-war to Fox Features, and get a stylistic make-over from good-girl artist supreme Matt Baker, which would come to land the cover of Phantom Lady #17 (4/48) in the pages of Dr. Frederic Wertham’s infamous “Seduction of the Innocent”. Matt Baker, derided now by some as an exploitative cheesecake artist, had in fact, as large a female audience as he did a male one, and his characters, to quote Trina Robbins “…were always beautiful and always strong”. “The Art of Glamour”, an in-depth study of the life and work of Matt Baker, one of the only African-Americans working in comics in the Golden Age, is due out shortly from Twomorrows press. 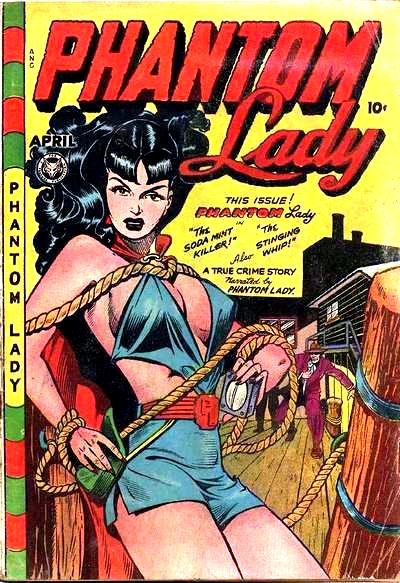 I first encountered our final heroine to be profiled in the Marvel reprint book Fantasy Masterpieces #10 (8/67). Timely’s Miss America would debut in Marvel Mystery Comics #49 (11/43), with her final appearance in that books 85th issue in 1948. In between, she would participate in the two adventures of the All-Winners Squad, alongside Captain America, Namor, the Human Torch and The Whizzer (Timely’s swipe of DC’s Flash), and also headline her own book beginning in 1944. Madeline Joyce would gain her powers of flight and super-strength through a combination of technology and lightning, according to creator Otto Binder, who with Fleischer Studios animator Pauline Loth supplying the artwork, crafted a heroine that spoke to the hearts of many young women. Her solo book, after one standard comic-sized issue, would morph into a magazine that featured super-heroics, fashion, romance and even cut-out dolls, and would last nearly a decade.

Miss America would return in the Modern era, in flashback at least, in Giant Size Avengers #1 (1974) with an apparent connection to the Scarlet Witch (also see “The Yesterday Quest” in Avengers #181-187), and later as a part of the WWII super-hero Liberty Legion. Most recently, as part of Marvel’s 70th anniversary celebration in 2009, there was a charming Miss America Comics one-shot, featuring a war-time tale of Fifth Columnist saboteurs and a fighting-mad battalion of “Rosie the Riveters”; kudos to writer Jen Van Meter and penciller Andy MacDonald for this lovely story.

This brief glimpse back, which doesn’t do nearly enough justice to the characters and their creators, will hopefully whet your appetite for your own exploration into this fascinating period of comics history.

FURTHER (and much better) READING: