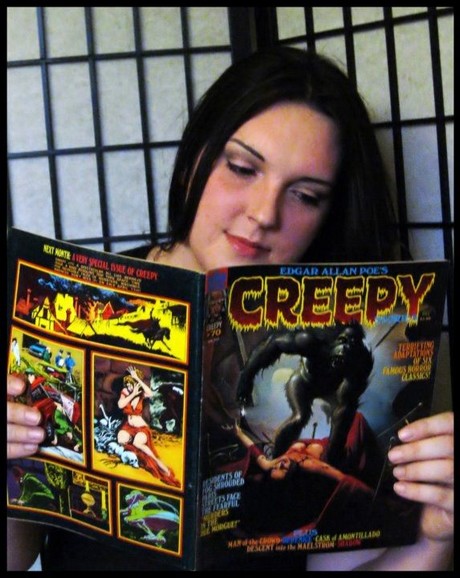 Rachel Deering is a writer, letterer and editor of comics, her most noteable work thus far being for Womanthology and her current comic series Anathema. Womanthology is a massive, 330 page hardcover collection, entirely created by women including Trina Robbins, Fiona Staples, Ming Doyle and Renae De Liz. Anathema is a gorgeous horror comic that continues to receive enthusiastic Kickstarter support. Besides her ongoing work in comic books, Rachel is known to be outspoken and brutally honest in social media outlets regarding her personal views on the industry and the support of independent creators, which is largely why I chose her for my Women in Comics feature interview.

Melissa:  How long have you been in the comics biz and how did you get started?

Rachel: Hmmm. I guess it’s probably been about 2 years now. I started out doing small five page horror stories for a local anthology comic here in Columbus, OH. I kinda took a big leap after that and did a ton of work on the Womanthology book from IDW. Now I have seven different books in various stages of production, and I’m constantly pitching projects to new publishers. Hopefully by next year you’ll see my name all over the shelves at your local comic shop. 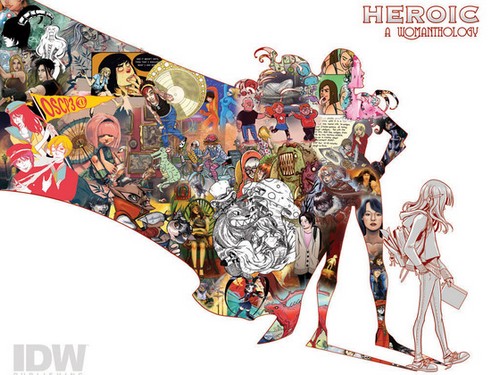 Melissa: Who are some of your biggest influences and why?
Rachel: Bernie Wrightson is my biggest influence, hands down. Everything about his art speaks to me on a personal level. I’m sure there’s some deep psychological reason why I’m so attracted to horror, and I think Bernie shares that malady. I actually just got to meet him at Heroes Con for the first time in my life, and I nearly lost it. I was fighting back tears, and all I could do was stutter and make a fool of myself. Even still, it was awesome to be able to shake his hand and see him smile back at me. Cheesy, I know.
As for writers, I’m not really influenced by too many people in comics, actually. My writing style is more a mesh of William Blake, John Milton, Robert E. Howard, and Algernon Blackwood. I like strange, poetic, off-beat writers more than anything, and you don’t really find that kind of stuff in comics. I strive to bring a different voice to the medium, and I hope that shows.
Melissa:  What are you currently working on?
Rachel: Issue 3 of Anathema, my all ages graphic novel The Other Side, a one-shot cape comic called Mister Misery, a dark fantasy series about nasty goblins that still has no name, a horror anthology I’ve put together with 14 different creative teams called Monstrology, and two short stories for other anthologies.
Melissa: One dream project you would love the opportunity to do one day? Anyone in particular you’d love to work with?
Rachel: Honestly, I think every new idea I come up with is a “dream project” for me. I put so much love into everything I write, it’s hard to imagine having one project I love more than any other. I can definitely think of a dream team I’d love to assemble for a project: Me writing, Bernie Wrightson illustrating, Shawna Gore and Rachel Edidin editing, and Nate Piekos lettering. Whatever book came out of that collaboration would be my favorite thing of all time.
Melissa:  Talking Comics is featuring this interview during our ‘Women in Comics’ week. How has your experience been as a female creator in the comics industry? Do you feel like your gender has ever played a part in a positive or negative direction in your career?
Rachel: Maybe initially, because the first big book I worked on was Womanthology. Obviously my gender played a role there. After Womanthology, though, I don’t feel like it’s been much of an issue. I don’t really try to set myself apart, though, you know? If you see me at a con, I’ll be right in the middle of a bunch of dudes at the bar, drinking a beer and saying crap that will make most of them blush. 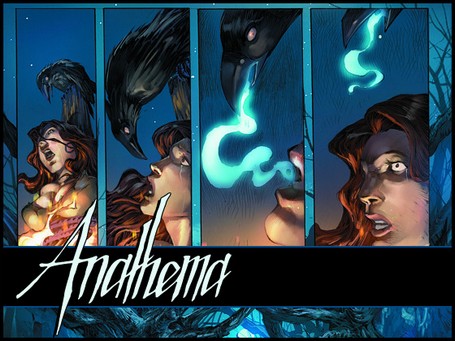 Melissa:  Your lead characters in Anathema are a lesbian couple. How was the feedback from readers on that?
Rachel: Nobody really seems to pay any extra attention to that facet of the book, which is EXACTLY what I wanted. It’s a good sign when the readers just accept it as a relationship like any other and go on with the story. Gay people don’t want to be treated like a novelty, you know? I’m really happy with the lack of reaction, honestly. Really happy.
Melissa:  Recently, LGBT themes in comics have become a highly discussed topic. Did you feel writing your characters as a gay couple was important to you, on a personal basis? Did you have any reservations about that?
Rachel: One thing you’ll hear again and again as a writer is “Write what you know.” That’s all I did when I wrote Mercy and Sarah as a lesbian couple. I don’t know how a straight dude would react to his wife/girlfriend being burned at the stake. I imagine he’d be pissed off. There would have been a lot more fighting and a lot less crying, maybe. So yeah, I wrote what I know, and that just happened to be a lesbian character. I never had any reservations about it, really. No more than I have reservations about walking out my front door and going to the grocery store as a lesbian. LGBT themes become a “hot topic” when a creator or publisher wants to get attention. As I said before, gay people aren’t a novelty, we’re not a marketing tactic to boost hype and sell more books. We’re totally normal, totally boring-ass people.
Melissa:  What, if any, changes would you make, if you had the power to, in the comics industry to make an environment more equally accessible to all creators, regardless of gender or sexual preference?
Rachel: I’d have to start with the model for comics distribution. We’ve got one company out there to distribute our books, and they act as a sort of gatekeeper for what makes it into the stores and what doesn’t. I don’t think that’s fair. I’d like to see indie companies put a little money into their own distribution, and shop their books directly to comic stores. That would cut out the gatekeeping middle man, give the publisher and creators more of a return on their investment (Not 60% of the cover price right off the bat), and maybe open publishers up to comics they wouldn’t have taken a chance on otherwise.Beyond that, I’d do my best to try and drive the primary focus away from cape books. Comics is in dire need of some diversity, and it’s really hurting the entire industry. I won’t rant about it, myself, because Eric Powell already did a fantastic job of it in Goon #39. If you want to read an AWESOME and enlightening single issue comic, give that one a shot.If you want to know more about Rachel Deering, or keep up to date with her projects, you can find her on twitter @racheldeering or on facebook !