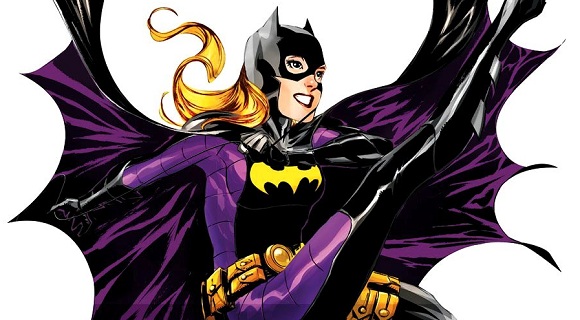 Casualties of The New 52: Stephanie Brown/Batgirl

In September of 2011 DC Comics re-launched its entire line of books. Not only were these books great jumping on points, but this “New 52” reintroduced classic characters like Swamp Thing, revised  D-list heroes (Aquaman), and added brand new characters to the universe entirely (I Vampire).  The New 52 took off and never looked back.

With the popularity of the new books being so high, we may just forget what we are missing out on.  Many characters didn’t make it through the re-launch and some that did were drastically changed. This column is here so we don’t forget the characters and books we lost: These are The Casualties of the New 52.

Stephanie Brown wasn’t always the most accepted character in DC’s works. Her time as Robin was controversial to some, and as Spoiler she was overlooked fairly easily. It wasn’t until she got involved with the Bat-family in a different way, that she truly began to shine. It was when she donned the cape and cowl as Batgirl, that she made her way into the hearts of many readers. She was easily one of the most likeable characters that DC had to offer. Ever the optimist, quick witted and with a can do attitude that made her a welcome addition to Bruce’s brooding band of brothers. Her addition to the cast of Gotham’s finest was the best since Damien became Robin. 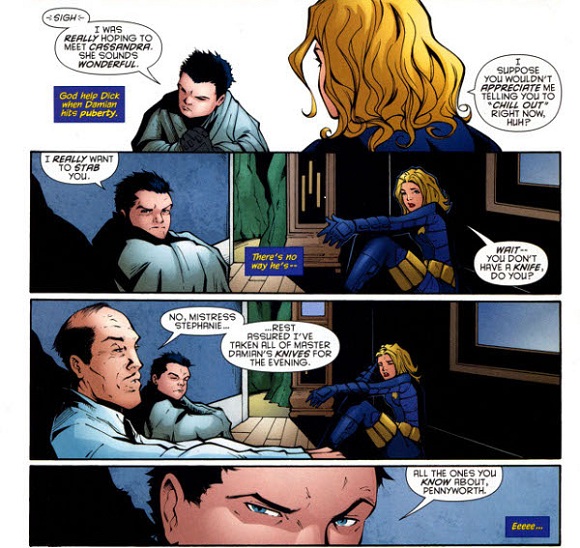 These two were magical together!

Stephanie was in more than capable hands with Bryan Q. Miller. He was able to test her, but keep her personality at the forefront. Though she made mistakes and was constantly in above her head, she never let anything bring her down. Not only that, but she vowed to do better each and every time she had a case.  Though she was bright and bubbly, it was her drive and will to protect that made her a natural addition to the Bat-crew. Too often in comics we see characters get lost in overly complex plot-lines and grander schemes, but Stephanie was never overshadowed by her trials.

The Batman series takes itself very seriously—as well it should, being a pillar of the DC Universe—but most of the Bat family books follow suit with the same tone. There are times where I want the crime solving aspects of Batman or Detective Comics, but not the brooding that comes with a Bruce focused book. People like Dick and Stephanie, ever the optimists, are needed in the dark and twisted world that surrounds Batman. They breathe an air of hope into the lungs of a city that prides itself on breaking everything its inhabitants hold dear. They have yet to falter in their optimism, and that keeps their readers up beat, despite what the characters endure. Those kinds of books provide something that is far from what you expect when you enter Batman’s world, but it is a change that is quickly welcomed. 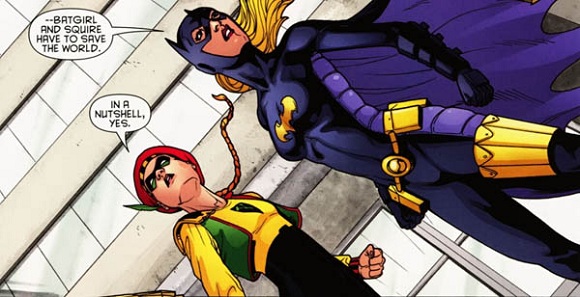 A hint at a future article?

There is something to be said for change. At times it’s even necessary. But, in the case of a character that is only 24 issues old, it was change wasn’t what we needed. We never really got to see a natural end to the character, nor did we see Stephanie fleshed out to her full potential. Great characters in comics are defined by their most trying times. Bruce is such an iconic figure because he has innumerable moments in which you know it would be easier to put down the cowl and move on. But it’s in these times where he endures that give us new nuances to the character and make him the legend we love. Stephanie never got the story that we could point to and say, “That is the Batgirl story you need.” Babs is an iconic character because of The Killing Joke. Though it was a Batman story, it gave you something that still defines the character to this day.

Gail Simone is one of the best writers DC has, and she has done a fantastic job with Batgirl. I love Barbara Gordon; however I kind of knew what I would be getting from her with her back as the New 52’s Batgirl. We knew she would have to deal with getting past the mental block that comes with going through such a traumatic event. Nothing meant to disparage what Gail has done to this point, but it was that predictability that led me to dropping the book. Stephanie was somewhat of an unknown commodity. I feel like it was a disservice to her, and her fans, to have her time as Batgirl come to an end in favor of a character that still played a prominent role in Gotham city.

We were recently teased with the return of Steph in Bryan Q. Miller’s Smallville: Season 11, but, no sooner than we got the news, it was ripped away from us. This past week at San Diego Comic Con, Dan Didio confirmed that Stephanie was being replaced in the issue by Barbara Gordon. It’s one thing to make creative changes, but it’s another to replace a character that people are pining for (especially with the person who just took over her alter-ego).

Though I love most of what the New 52 has given us, I can’t get over the fact that I truly miss picking up Miller’s Batgirl every month. It is a loss that came without consolation, and left a void in the Bat family that has yet to be filled. DC made a decision to drop Stephanie Brown as Batgirl, and in doing so they have taken away a role model. Not because of her actions, but her attitude. She gave us something that we could learn from. We may not succeed in everything we do, and we may not be able to see a way out of our most difficult times. But that doesn’t mean we shouldn’t try, and expect to be successful nonetheless. Stephanie Brown may not have a book to bring us her shenanigans, but we can hope that she will be back soon enough.

WE DO NOT! DC on the other hand…

This is the first of, what I hope to be, many articles like this. You guys get to read my thoughts all the time. Rarely do we get to read yours. These articles are about characters or books that we have lost.. This is where you can voice your opinion. Be on the look-out for me in the coming months as I ask you about your favorite books!

“She was constantly in over her head but always gave her best. She was smart, witty and hopeful for the future. Can’t wait to see her again.”  -Lou Martinez

“I liked her because she was a breath of fresh air…everyone else in the bat family are such downers…It was fun to have someone on the other side of the spectrum.”  -Vlad De Brancovan

“She was different from the others in that she took a really long time to earn the respect of her peers and always had to prove herself. Most people just assume that once you’re with the Bat, you’re one of the best, and you are, but Steph had a lot of growing up to do both in and out of the costume that made her transition into Batgirl (And during) very endearing.
Not only that, but she was the most relatable to me because she was the odd one out of the bunch. That I could identify to a female character so easily is a rare thing for me and I really wish I hadn’t lost that touchstone.”  -Henry Varona

I love Stephanie Brown! I know you do as well. So, let us know some of your favorite Steph moments here in the comments, or get at us on Twitter! You can send them to @talkingcomics or @dshort_0610. Use #waffles to confuse those not privileged enough to know about Steph’s one true love.