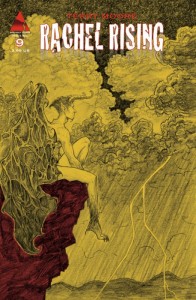 For those in the dark, Rachel Rising is a horror story. Not one full of blood and gore, but one that thrives on the unknown, the unpredictable, and the innocent. Rachel is, for all points and purposes, a dead woman who is somehow still alive. The actions that lead to her death are still a mystery, but issue 9 gives a solid glimpse into her past. The scene where Rachel reveals her true self is fantastic, and we finally get to know Zoe (the 10-year-old who leaves dead people in her wake) a little better. Forces beyond just life and death are at play in Moore’s spectacular series.

I don’t want to give away much of the story. I do want to stress to you that Rachel Rising is what comics are about: a killer plot with some of the best artwork you’ll see in a monthly series. An added bonus to the series is Moore’s choice of women. Each woman in Rachel Rising has the potential to be a standalone character. That’s a pretty cool feature for any comic book.

By all means, buy this book! It’s not published by a major comic book company, so every purchased issue counts. Moore has a story to tell, and he needs his readers to support him in this endeavor. You can find back issues on his site, or talk to your local comic book shop about ordering the first issues in the series. The story does not waste breath, the characters are relatable, and the black-and-white art is to die for. What more could you want in a comic book?