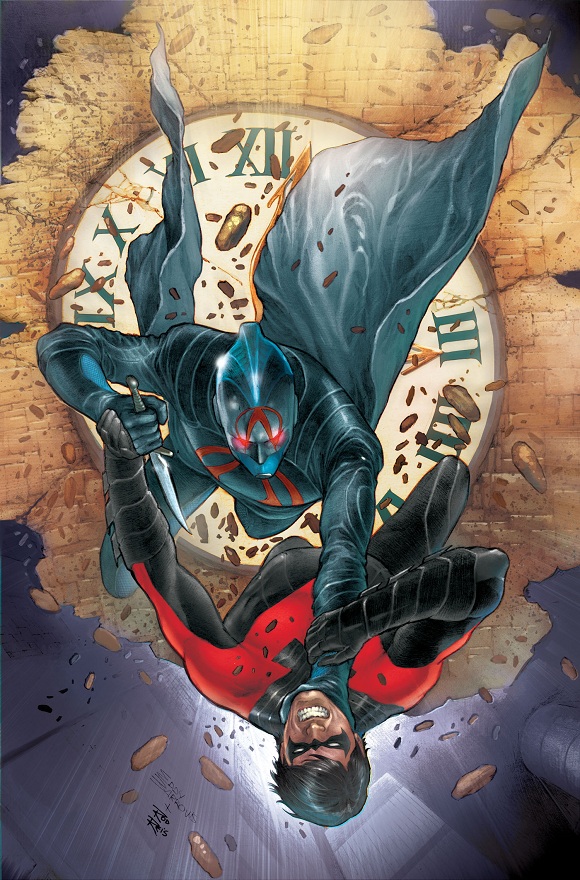 In my opinion, Nightwing has been one of the characters that have benefitted the most from the re-launch. He took a step back from being Batman, but it was a natural change. His stories have made him a much deeper character. This story looks to continue to do so.

Dick is investigating the murder of two guys that happened to be killed with one of his beating Sticks. This leads him down a rabbit whole to find a group of guys that have been wronged by the Bat family in one way or another. They call themselves The Republic of Tomorrow, and want to take the Bats out of Gotham. Alongside this story we get Commissioner Gordon trying to find out if one of his men is trying to frame Dick for the murders. By the end of Nightwing #11 we are left with revelations on both fronts.

The former Boy Wonder has been able to shine with Andres Guinaldo in charge of art duties. The acrobatics Dick is known for has been on full display. He just looks nimble and graceful as he hops and dives around the page, and the layouts are pretty awesome. It’s cool to see something a character is holding in its hand turn into more panels on the page. The innovation in the book’s panels is something that really grabs your attention.

There are two things that are glaringly obvious in Kyle Higgins’ Nightwing series: 1) He absolutely loves the character, and 2) There are tons of notes from the Editor. The former outweighs the latter, but geez there are so many little yellow boxes on the pages of the past few issues. I understand keeping people in the loop, but that was kind of the point of The New 52, right? It’s a miniscule complaint to have and not one that ruins an experience for me, but one that annoys me to no end.

Buy it- If you’re a fan of Batman and his brand of books, then Nightwing should be in your pull list. Kyle Higgins has put Dick through the wringer so far, and it’s all for the betterment of the character.