FacebookTwitterPinterest
The Amazons. A proud race of female warriors who study democracy and work diligently to improve themselves and their society as a whole. The Amazons have been known to advocate on the behalf of others for their rights as human beings. Or so we thought. 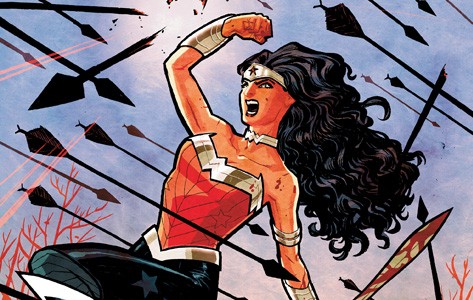 A proud race of female warriors who study democracy and work diligently to improve themselves and their society as a whole. The Amazons have been known to advocate on the behalf of others for their rights as human beings.

Or so we thought.

I think Brian Azzarello is a great writer. I’ve enjoyed the Wonder Woman revival he’s been leading. Azzarello’s stories have a heavy mythological tone to them and are deliciously dark. Chiang has shown us a strong Diana, one head and shoulders above the rest who looks the part of an Amazon princess.

But there is a price to this revival. She has to be new, edgy. Different.

Gone is her traditional backstory. No longer is she a product of a woman’s longing for a daughter, but the offspring of a woman and a lustful, cheating god. And now, now we have a smearing of the Amazonian name.

In Wonder Woman #7, we see the product of shock-and-awe storytelling. For the majority of Wonder Woman’s existence in the DC Universe, we know her people to be favored by the gods, receiving immortality and youthfulness. The Amazons were a treasure to the Greek gods. Azzarello gives us something completely different.

Instead of a strong, peaceful, independent female race, we are handed a group of women who seduce and kill men for their own needs.

We have thought the Amazons to be a stable group of women with no need for man. Now, we see a race of women who have sex with men, kill them, and discard any male child born to their race. Let’s pause for just a minute. Women killing men. Why is this in Wonder Woman’s comic book? How could a woman who is an advocate for peace and democracy for ALL MANKIND come from a race that systematically kill men to get what they want? The reverse is considered unacceptable as well; men who kill women for their own gain are no better. If anything, this comes across as smearing of the principles of feminism.

We’ve looked at the shocking aspect. We know that this is something that the Diana we know would do everything she could to stop it. This action on the part of her sisters is incongruent with our character (hopefully Azzarello will play off of this in future issues).

The change is to revamp a tired character. No one knows how to write for Wonder Woman. Batman and Superman have no problem with stories that are consistent with their character, but Wonder Woman must constantly be changed in order to gain new readers. Instead of creating a new character with the background presented in this last Wonder Woman issue, it is no problem at all to change her history. After all, it’s what Wonder Woman fans have come to expect.

And finally, the cultural importance of this historical change. We know the Amazons are connected to Greek mythology and culture. Any Greek myth you come across is filled with blood, vengeance, magic, and pride. So, naturally, instead of presenting the Amazons as the utopian ideal of the Greeks, let’s bring them down a few notches. I can understand making them more congruent with the rest of Greek mythology, but the biggest appeal of the Amazons was how they conducted themselves. They were different. They found the secret to a peaceful life, and strove to protect it. They kept the gods in check, being faithful to them while holding them accountable for their actions. Tricking men to having sex with them, killing them, and discarding their male children is not the way of the Amazons I know. 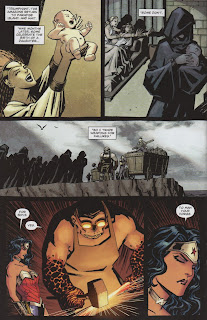 The redeeming factor of this last issue is Wonder Woman’s run-in with her “brothers”. Wonder Woman finds out that the boys discarded by the Amazons were taken into the care of Hephaestus. During the course of the plot, she decides to take on Hephaestus, and calls upon his wards, appealing to their Amazon heritage and strength in war. They look at her with wide eyes, flocking to the injured Hephaestus.

“Please, release our master. You are making a horrible mistake…We owe the smith our lives. If it wasn’t for him, we would have been thrown in the tide—to drown unloved.”

She is baffled. Confused. Humiliated. The men chose to protect the god that protected them. This is the Amazonian way. Loyalty to family. Peaceful solutions.

It is interesting to see the cast-off Amazonian men displaying the ideals of the race.

For other takes on this issue, check out She Has No Head, Comics Corner, and The Mary Sue.
By Mara Whiteside
This article was originally posted at http://thesecretlifeofcomicbooks.blogspot.com/ in March 2012. Reposted on Talking Comics with permission.