Check it out: http://www.kickstarter.com/projects/371053085/the-merciful-vol-1 !!! We here at Talking Comics love new writers and artists, and we love giving them the spotlight! So click over to Adam, Kyle, and Dan’s Kickstarter page or keep reading on! Creators away!

Dystopian Futures are so hot right now. Over the last few years, our collective pop culture consciousness has been filled with images of zombies, nuclear disaster, pandemic, government corruption, economic collapse, and other apocalyptic miscellany. Why all the end-of-the-worldy stuff? Perhaps because it feels relevant to the conflicts of our time.

The team behind The Merciful Vol. 1 has latched onto this connection, and they have chose to set their dystopian (near) future in a world where oil shortages and nuclear war have led to economic and social collapse. When the Takahashi Enterprise manages to genetically enhance livestock, the world celebrates what it assumes will be the end to rampant starvation. It’s soon discovered, however, that people who eat the genetically engineered meat become ill, and some fall into comas while others are left scarred and impotent. Sound familiar? It should, considering the 24-hour news cycle that reports on these exact conflicts and potential threats in our current geopolitical landscape.

But this is all prologue to a more intimate story at the core of Adam Jack and Kyle McEwan’s comic book project. A young doctor named Joshua Van Es thinks he has the key to solve the food-borne pandemic and reverse the sterility of the human race. This puts him in conflict with Private William King and his wife, who are rumored to have birthed a son after the sterility epidemic struck. Van Es puts a team together and they try to hunt down King and his family before the corporations pull the plug on his project and euthanize the sick. 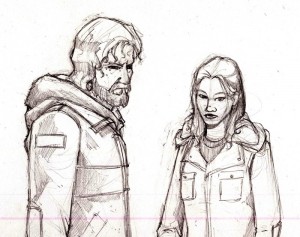 It’s a story of survival that explores the grey areas of morality, family, and social responsibility. In the words of the writers, “there’s no one in this story thats really doing anything evil or maniacal. They all think they’re doing the right things for the right reasons.” Adam and Kyle are currently 5 issues into writing the series, and they’ve recruited aspiring artist Dan to illustrate the series.

And that’s where the Kickstarter comes in. In order to ensure Dan has the time to work on the series, the team is seeking financial assistance for the project. All the proceeds from the Kickstarter will go to the artist so that he can take time off from work to finish the book. There are some killer perks for pledging, including advance copies of the series, original artwork, and even a personalized cameo appearance in the book. For a pledge of $750, you’ll get all that and a featured death. How crazy is that!?

The book looks like it’ll be a wonderful blend of horror, suspense, science-fiction, chase-scenes, corporate malfeasance, and Big Questions about security, family, and freedom. And the art looks damn good: 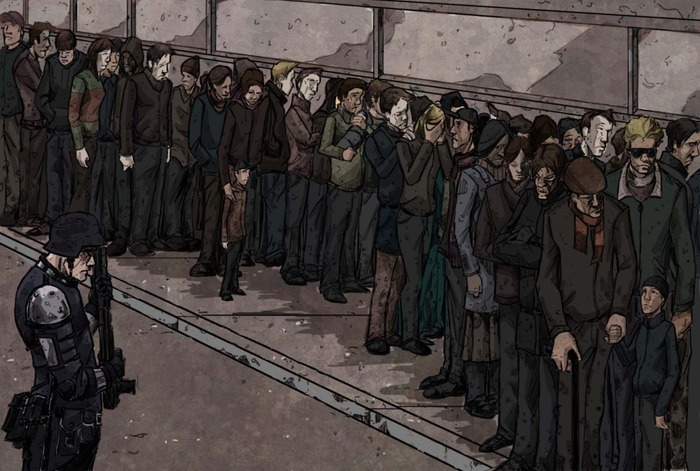 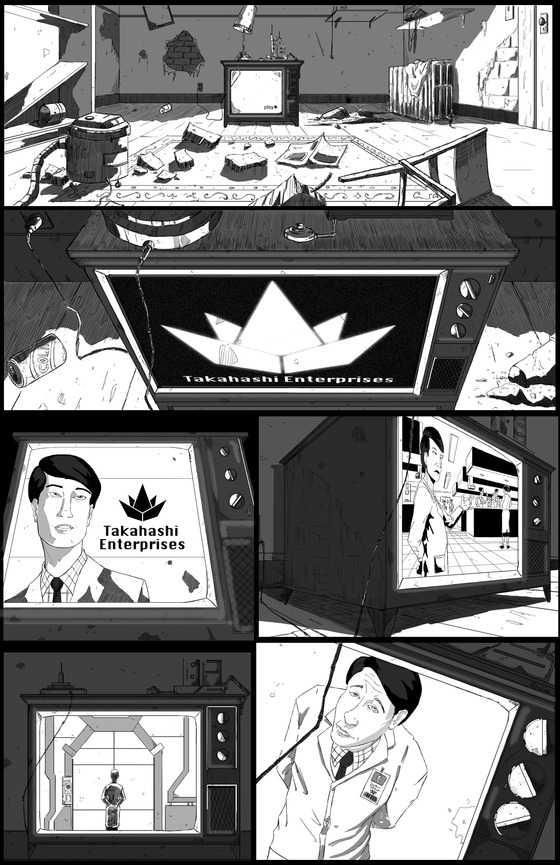 So head on over to The Merciful Vol. 1 Kickstarter page, or check them out on Facebook and Twitter. Even if you can’t donate, do these guys a solid and share their Kickstarter page on your favorite social media engine!