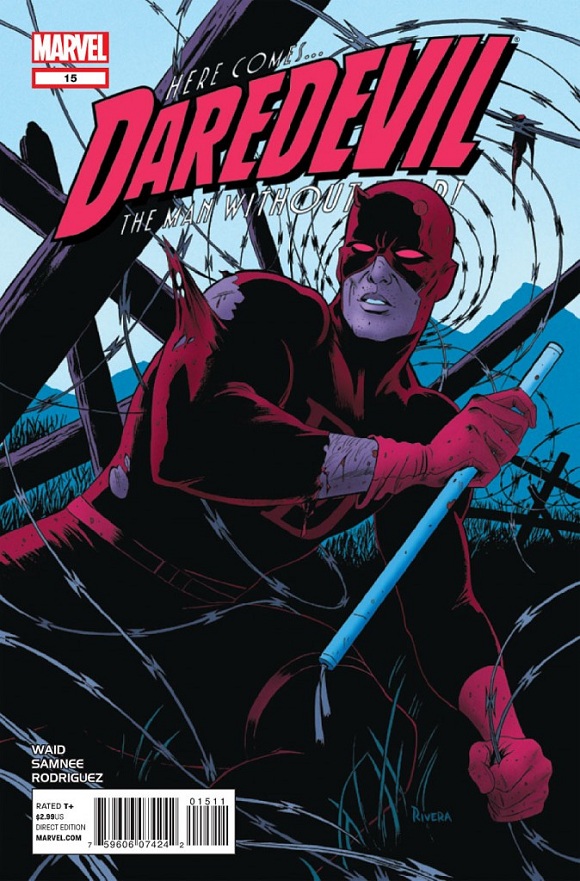 If you would have told me that I would be reading a Daredevil book a few months ago, I probably would have laughed at you relentlessly. Nevertheless, here I am enjoying the hell out of some Daredevil. Mark Waid has turned this character, which lost a lot of followers as Matt Murdoc’s previous run went along, and revitalized it into one of the best books Marvel puts out.

We pick up in #15 with Matt still numb to the world around him. Like anyone without senses, he is completely and utterly useless, but Waid makes you think as the book moves along: What exactly is Daredevil’s power? We know he has a heightened ability to interact with the world around him, but we are given the notion here that his actual power may be his brain. It may be a total red herring, but I got the feeling that Waid is trying to insinuate that Matt’s brain and its ability to cope is his true power. Without any of a person’s usual senses Daredevil is able to gain a new set of skills in order to aide him. It is some really interesting depth to the character’s ability, and something I would love to see more of.

The art by Chris Samnee is great. The charm it possesses doesn’t compete with the breath taking brilliance you see in books like Captain Marvel #1 (art by Dexter Soy), but the retro style sets it apart just the same. You don’t get many books with the look that Daredevil gives you. Sometimes different and effective is better than the same old dark and gritty most artists are capable of giving so regularly these days.

Buy it- If there was one thing to get me interested in any character, it is taking a new look at who and what they are. Matt Murdoc has been through some serious stuff recently, and Waid has handled his return perfectly to this point. This arc has been no different, and had a pretty good jumping on point just a few issues back.