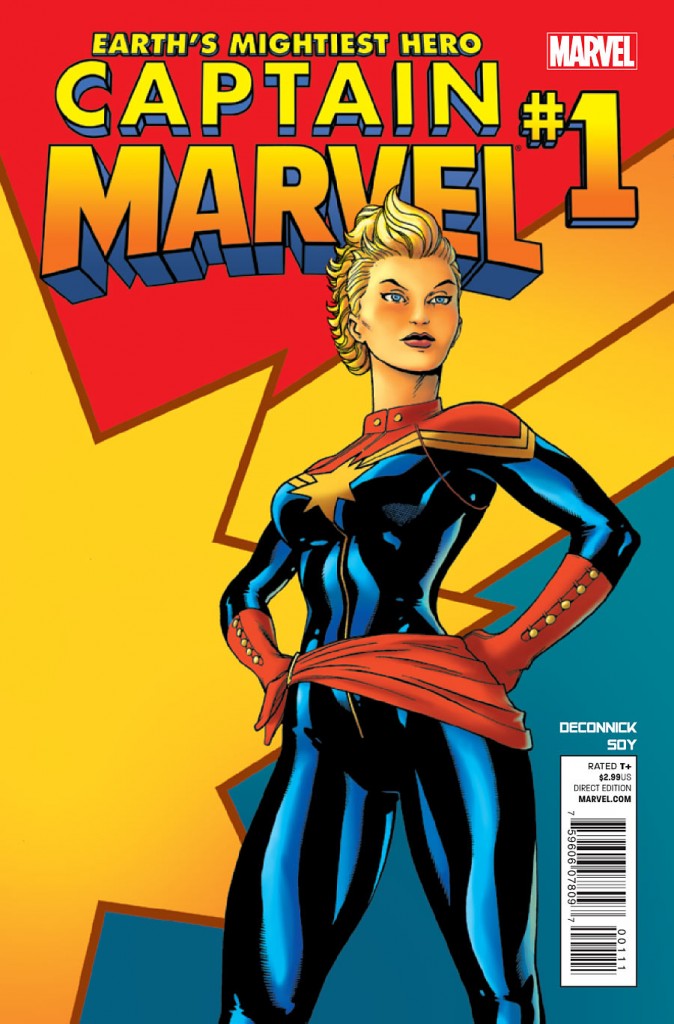 A few months back when we began to discuss doing a Women in Comics week here at Talking Comics there was a debate on when our first “event” should fall. I casually remarked that perhaps we should line it up with the relaunch of the new Captain Marvel ongoing series that was happening in July.  At the time I had no special affection for the character of Carol Danvers, but it just felt like the right time to put things in motion. We set the date and then began our preparation in earnest. In the proceeding months my anticipation steadily grew and now the book, that became the backbone of our Women in Comics week, has finally come out, and I’m incredibly happy to report that Captain Marvel #1  kicks major ass.

The first thing that strikes you about Captain Marvel #1 is just how damn beautiful it is to look at. Dexter Soy’s pages and panels are painterly epics that look as if they are murals come to life. I could imagine walking into a museum and seeing an entire wall covered with the images from this book. It’s experiential and emotional art that manages to transfer seamlessly from bombastic action scenes, to small emotional moments with out ever feeling overwrought. I’ve never had the pleasure of seeing Mr. Soy’s art before, but if Captain Marvel is any indication, I’ll be seeing it for many years to come.

The first thing you notice about Captain Marvel #1 is the way it looks, but it’s the sharp, funny and inspiring writing of Kelly Sue DeConnick, that stays with you long after putting it down. She has written Ms. Danvers so authentically that she feels alive, and ready to burst off the pages right into real life. (I wish) DeConnick achieves this, not by making Carol a saint, but as someone who is always looking to be better. She’s a person who is constantly wrestling with what her powers mean, if she has any right to take up the mantle of a long dead friend and even how to best care for a loved one who is knocking on death’s door.

Carol’s life isn’t simple, and it would have been easy to write her as a dour, angry, sad sack, but DeConnick has no interest in that. On the contrary, she has written a character who is funny as hell. She has crackling exchanges with Captain America, Spider-Man and her disease stricken friend, that all left me either laughing out loud or with a giant smile on my face. This sense of humor and sharp wit makes her both strong and extremely likable, which is hard balance to strike.

There is sadness, action, and humor a plenty in Captain Marvel #1, but I would be remiss if I didn’t mention my favorite moments of the book. These are the times when Carol needs to think and she takes off for the stars. Getting to see her fly through the upper atmosphere, hearing her inner monologue and seeing her dearly held memories, solidified this as one of the strongest #1’s I’ve read since we started doing this almost a year ago. So, bravo to Kelly Sue DeConnick, Dexter Soy and the team at Marvel for putting this book on the shelves and I for one, can’t wait to see Carol Danvers punching holes in the sky for many issues to come.

Barely anything. If you don’t know the character of Ms. Marvel, do not be afraid because this book welcomes you with open arms

If you couldn’t tell Captain Marvel #1 is a book you should be picking up. Dexter Soy’s art is beautiful to behold and marks him as a rising talent in this industry. The writing by Kelly Sue DeConnick is layered, sharp and emotional and Carol Danvers is a fascinating character. The book is everything I could have hoped for and I couldn’t be prouder that it’s the backbone of our Women in Comics week.