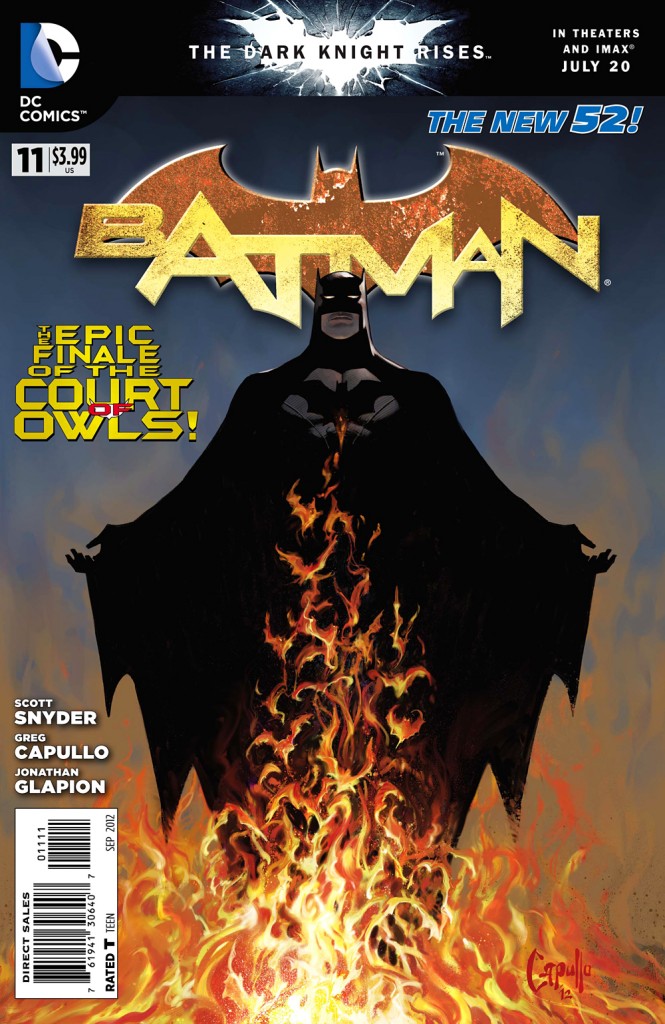 Back Up by Scott Snyder and James Tynion IV

Back up art by Rafael Albuquerque

Beginnings are easy, they are free of expectations and are full of promise, it’s endings that are hard. Endings are full of hanging plot threads, unfinished character arcs, and questions that need answering.  The truth is, a story conclusion can often mar a reader’s memory of an otherwise stellar narrative experience. Batman has been my book of the New 52, and over the ten months since its inception, writer Scott Snyder has been steadily crafting a Dark Knight opus for the ages. So, it was with both anticipation and fear that I opened the pages of Batman #11. Would Scott Snyder wrap up his Court of the Owls storyline as well as he began it? Does he pay off the giant reveal he set up in issue #10? The answer to both these questions is an equivocal  yes, because even though the issue does not have the same uniqueness as its predecessors, it’s still a tightly written and entertaining finale to the this stellar story arc.

You may be asking yourself, if the story is engaging and well crafted, why my positive criticism comes with caveats? The answer to that dear reader is this, heavy is the head that wears the crown. If this had been the conclusion to a good story, or even a really good one, I have the feeling I would be completely satisfied right now. However, Snyder has been working at such a high level that anything less than spectacular feels out of place. Make no mistake, I would still recommend people buy all these issues, but in the minutia of what separates the levels of greatness it comes in slightly below numbers 1-10.

Even as type I these words I can feel my inner voice saying, “you are being unfair.”  This is a kick ass Batman story, that features a hell of a fight, packs an emotional punch, and features a back up that is quite stellar. Snyder doesn’t skimp on the reveal he set up in issue #10, delving deep into the reasoning and validity behind it, but leaving it up to the reader to decide what they really believe.  Whether or not this pay off is satisfying depends upon your expectations, but I found it to be open ended in a way that left me quite intrigued. Would I have liked to see Snyder take the plunge and irrevocably change the Batman universe?  Yes. But I have a feeling we haven’t closed the book on the Court of Owls, so I’m not passing judgement just yet.

Greg Capullo’s pencils in Batman #11 continue to be a standout.  Here he is asked to craft a fight scene that goes from warehouse, to skyline in quick order and the sense of movement and physicality is amazing. The backup is again tackled by Rafael Albuquerque and it is once again stunning and scary in equal measure. As is the writing by Scott Snyder and James Tynion IV who have made “Fall of the House of Wayne” a piece of essential Batman storytelling.

Buy it – It’s not the best issue of Scott Snyder’s Dark Knight run, but Batman #11 is still better than almost all other superhero comics today. The art by Greg Capullo continues to be outstanding, and the back up is powerful gothic story telling. This may not go down as one of the best endings, but the journey it took to get here was downright genius. Think about it, in under a year Snyder has introduced an iconic new villain and redefined what Gotham represents. So, I say cheers, and I can’t wait to see what happens next.