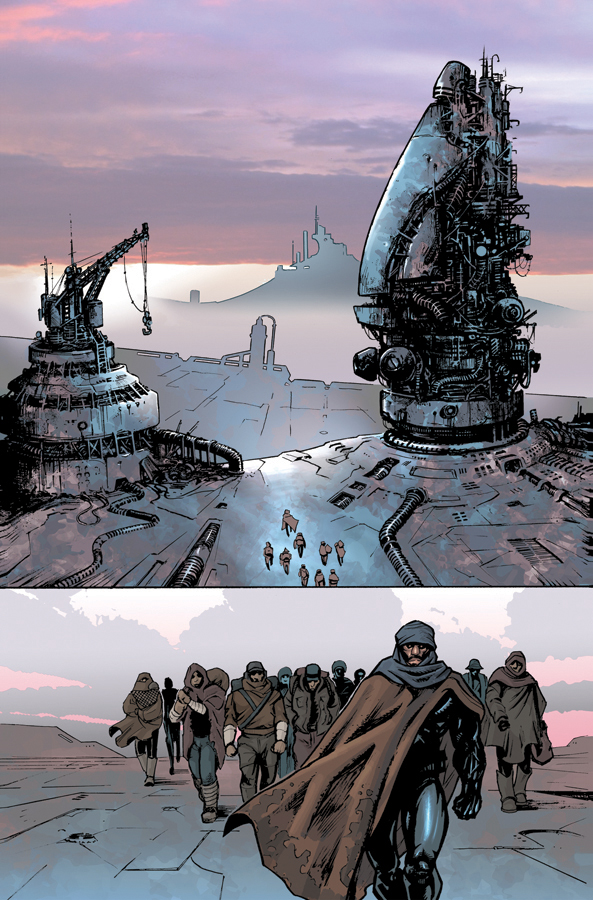 Silas continues his adventure of trying to escape of the unknown planet in this latest issue.  The story begins with an unknown group of people who are dead set on attacking the giant mechanical monsters-called Rovers-even if it kills them-and a couple of them do get to meet their maker. Elsewhere, Silas emerges from a sewer pipe accompanied by his guide Mendel who tells Silas how to continue his journey, and then they part ways.

After climbing up a monstrosity of an architectural structure called the Slab, Silas spends the night and the next day after watching a ship crash not to far away from the Slab, he gets captured by a lady named Onica and her alien friend Ebo. Onica explains to Silas that the Rovers do the bidding of the Ono Mao as she has had a past encounter with them. Silas believes that if they can get back to the ship and fix it, they’ll be able to leave the planet.

Meanwhile, Onica scans the horizon to check if the coast is clear and sees a that same unknown group of people be ambushed by three Rovers. Silas convinces Onica to untie him and the fight begins…

I enjoyed this issue and though I didn’t read the first issue, this second issue  definitely piqued my interest to continue to read the series.  I liked Garing’s story telling and I enjoyed his artwork. His artwork  is very detailed and puts objects such as the spacecraft into perspective. You can tell visually how huge it is and it’s realistic.

Verdict
So far, I think readers are getting their money’s worth with this comic. I’m curious to see what will happen next.