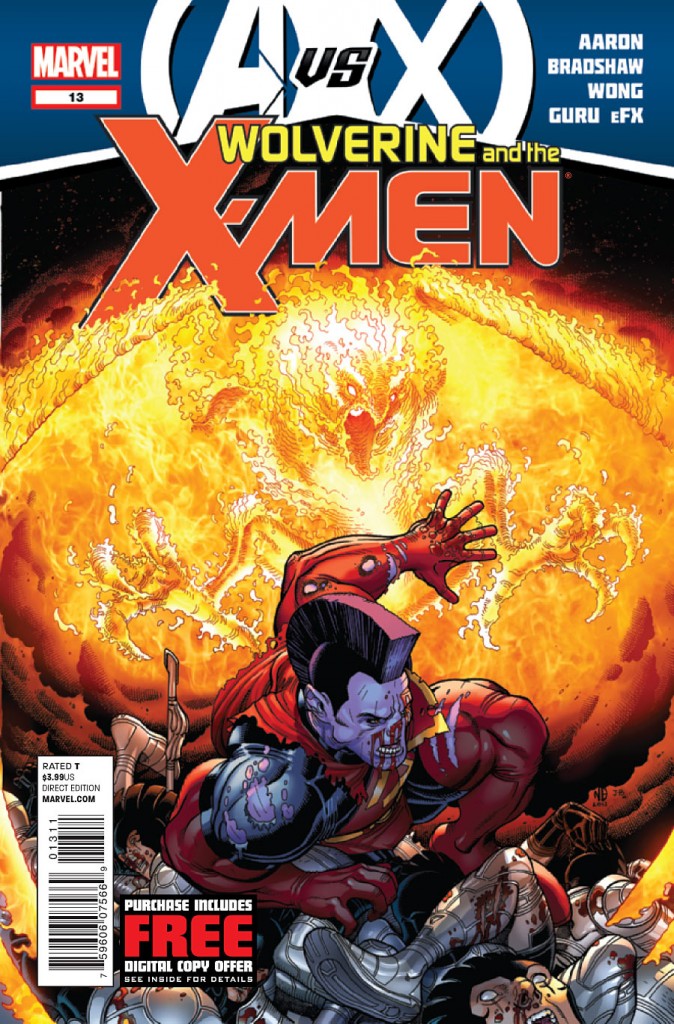 I am FIRE and LIFE INCARNATE!!!

If you caught my last review of Wolverine & The X-Men #12, you’ll remember that I voiced some concerns over its treatment of Avengers Vs. X-Men storylines and haphazard characterization. You’ll also remember that I felt that Jason Aaron succeeded most with Kid Gladiator, a character of his own creation. If you didn’t catch said review, well, now you’re all caught up.

Wolverine & The X-Men #13 puts the series back in stride after last issue’s issues. Since the AvX tie-ins started, Aaron has been promising a Shi’Ar intervention, led by Emperor Gladiator. That plot thread finally comes to fruition this time, with Gladiator leading a Shi’Ar strike team against the Phoenix Five in the hope of collecting his son, Kid Gladiator, and trying to persuade the X-Men to relinquish their newfound, devastating powers. Needless to say, there are some pretty heavy fisticuffs in this issue between the alien visitors and the Phoenix Five, with some equally heavy mid-battle conversation about their mutual history, their mutual respect, and the dangers that they now find themselves in. Aaron deftly displays the frightening ruthlessness of the Phoenix Five, but also suggests that Cyclops retains some level of compassion. But no spoilers!

Instead of simply showing the battle between the Phoenix and the Shi’Ar, Jason Aaron instead frames the whole issue around the life story of Warbird. Another character that debuted under Jason Aaron’s pen in the first issue of Wolverine & The X-Men, Warbird has served mainly as the mysterious, hyper-aggressive, bodyguard straight-woman to Kid Gladiator’s slapstick, joke-cracking comedian. Even though Marjorie Liu has been using her over in Astonishing X-Men, Warbird hasn’t really been fleshed out as a character. Until now. (Dum Dum Dummm!)

It’s a cool backstory, but I did find myself asking “Why?” while reading this issue. More specifically, “why do I need to know Warbird’s backstory?” Of course, Aaron has focused his entire Wolverine-centric story on the question of how wartime and violence affects children, and Warbird’s life story fits very much inside this metaphor. In this sense, Aaron succeeds in making an otherwise peripheral backstory relevant to the larger mission of the series. And he fills it with enough humor, irony, and tragedy to make the read enjoyable.

Nick Bradshaw and Chris Bachalo have been flip-flopping art duties on the series with Chris Bachalo since #1. This issue sees Bradshaw take the helm, and his clean, cartoon-inspired style captures the action quite well. Aaron’s script moves from the flame-ridden battle on Utopia to the Shi’Ar slums to a space garden to a space ship, and Bradshaw’s crisp artwork is up to the task in each location.

Wolverine & The X-Men#13 is good, but it isn’t a must-read. If you’ve been reading Wolverine & The X-Men all along and are a fan of Aaron’s characterization, you’ll be pleased with this book. If you haven’t, I don’t really feel that this issue is absolutely imperative in terms of the Avengers Vs. X-Men crossover or, frankly, the X-Universe proper. The tease for next issue, however, does intrigue me, and I’m looking forward to picking it up in a few weeks. This issue, though a step in the right direction after the last one, still doesn’t match the caliber of the early tie-ins or the pre-AvX stories.