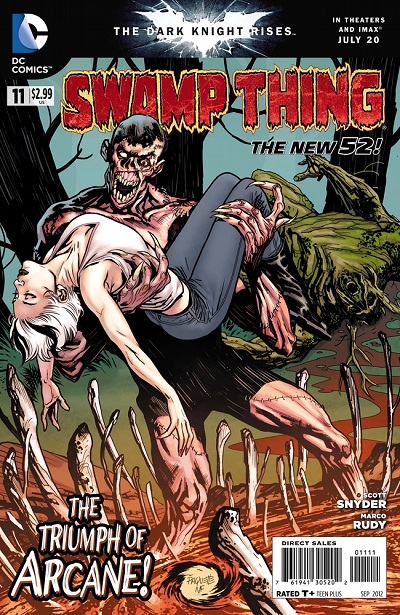 Scott Snyder had himself a week to remember this week. Three books released on the same day, and yet another to drop later this month. Knowing how most writers struggle on at least one of their undertakings, if overworked, I had my worries for Swamp Thing coming into #11. Rest assured that Scott is able to deliver yet again for the Warrior of the Green. It isn’t much in terms of moving the story past what we came to two issues ago, but it is a perfect bridge into Rotworld (the Swamp Thing/Animal Man crossover that starts next month). We get closure, for now, with Anton, and then segue right into the next story. Buddy Baker showing up shouldn’t be a surprise—seeing as we have known about this crossover since Buddy and Swamp Thing came out both fighting against the Rot. Scott Snyder and Jeff Lemire have not been coy with their plans (and it may have lessened the impact of the final page), but it still makes me extremely excited for the chapter to their stories.

Yanick Paquette is absent, yet again, but Marco Rudy steps in to help continue Snyder’s love letter to Alec Holland. And he does so admirably. Rudy has worked on the title before and his experience leaves us with something comparable to what we expect from Paquette. He hasn’t quite mastered the intricacies that Yanick has stunned us with, but the art is still what stands out of the issue. Swamp Thing has been a bit more action oriented than I had expected, and Rudy is able to conjure a pretty awesome fight between Swampy and Anton Arcane’s un-men. I look forward to Paquette’s return, but Rudy would be on my short list of possible replacements moving forward if the inconsistency continues.

This two issue side story hasn’t given us much in terms of groundbreaking plotlines, but we do get to see the Parliament of Trees reborn in this issue. If you have ever wondered what literal Cabbage Patch Kids would look like, you need not look any further. It’s a funny addition, but now we have the ability to have them take us through the history of the Green. I almost thought that the Parliament would be used as John’s uses the Guardians, and give some depth to the Green as an entity. When they burnt to the ground I thought that route was gone for sure, but reintroducing them seems to be a wise choice by Scott in the long term.

Buy it- Swamp Thing is a fantastic book if you’re tired of tights and capes super heroes. There’s a horror element to it, but it can still bring the action that you crave from books like Superman or Justice League. With Rotworld coming, you’d better to read up on your Swampy, and get ready for a wild ride with the two hottest writers DC has to offer.