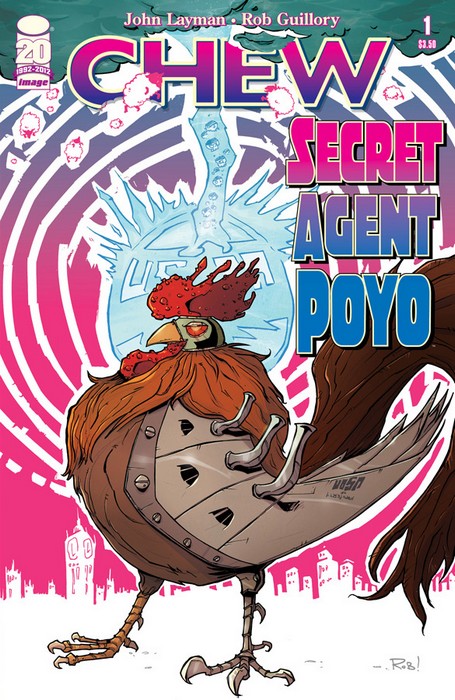 Chew #1 was a definite sleeper hit, sneaking up on comic readers as a weird, goofy indie publication that wasn’t given any huge hype at release but is now selling for upwards of $300 on Ebay for a first print edition. Another sign of the success of Chew is this spin off, one shot issue based on Secret Agent Poyo, a cybernetic rooster who kicks bad guy ass all over the world (and underworld).

Secret Agent Poyo can’t be kept down by death, the devil himself, radioactive zookeeper super villains or farm animal rainstorms. He’s sassy, fearless and stuffed with mechanical tools and weapons. Poyo is who the law calls when they run out of more rational, less violent options.  Chew: Secret Agent Poyo is a collection of short stories; adventures of crime fighting awesomeness.

I’m a big fan of Chew, it boats a fantastic sense of humor sorely lacking from comics today. Rob Guillory’s art is goofy and super fun, reminiscent of some of my favorite Saturday morning cartoons. This book, along with everything created by Guillory and Layman, is an entertaining, silly roller coaster ride of laughs and lovable characters.

Verdict: Buy this. Don’t wait. It’s a feast of fun and you won’t regret it. If you do regret it, you must not be a fun loving person. Yes, that’s right, you are not fun if you don’t enjoy this comic book. This is my declaration.