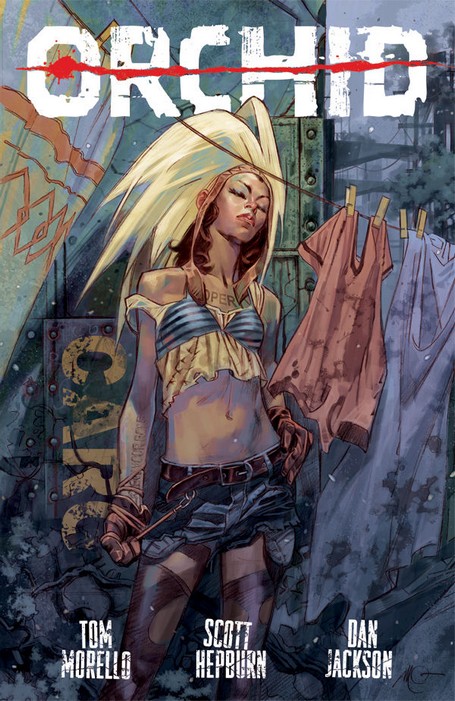 Orchid is a post apocalyptic story of a slightly different kind. It’s the story of mother nature coming to reclaim the earth, to make humanity pay for it’s centuries of abuse and disrespect of her. The seas rose and genetic codes were smashed. The land disappeared and animals became something more wild than ever; humans fell to the bottom of the food chain. As humans will do in times of desperation, the powerful claimed the weak as their property and everyone abandoned what culture they once had in favor of survival at any cost. The world of Orchid is not a pretty one; it is a brutal and unforgiving place.

In the chaos of change after the seas rose, when the rich and powerful declared themselves master of all, a masked leader committed himself to leading the poor and oppressed in rebellion. Although the rebellion failed, the mysterious mask that General China wore, a mask that claims the lives of anyone unworthy who attempts to wear it, was saved from the clutches of the enemy. This mask becomes the last remaining symbol of what General China perished for and is the motivating factor for the tattered remains of the rebellion to reach for their freedom again.

Orchid is a jagged, dirty tale of people with no hope fighting for a world that seems out to destroy them at every turn. ‘The Wild’ is ruled by genetic monsters, man eating animals that can not domesticated, the new predators of  a new landscape. People take advantage of each other through slavery, abuse and mistreatment.

Anyone familiar with Tom Morello’s music career, most famously with Rage Against the Machine, knows that he uses every opportunity to express his political views and humanitarian passions. His writing for Orchid is just another outlet for dreams of rebellion and ‘beating the system’. Most would approach a comics project written by a musician hesitantly, and I am no exception, but from Issue #1, I found Orchid to be well done and fun to read. The characters develop quickly, the story moves along at a nice pace and although there is much happening, it never becomes convoluted.

The art work of Scott Hepburn (Star Wars: The Clone Wars) is a harmonious partner to this well thought out story. The style is fairly classic comic stuff, slightly cartooney, but in a very grown up way. It’s colorful and rich, quite nice to look at and when it’s important, heavy in detail and texture that brings the strange world of Orchid to life brilliantly.

Verdict: Definitely a buy. Personally, I’m a big fan of having great stories like this one neatly collected in TPB, as it’s all the more fun to read in big chunks at a time. I think Orchid will find a special place in comics for it’s intelligence and political message, along with it’s easy pace and feisty characters. This book is well done and I really hope it continues on this path, so I can see what will happen next.