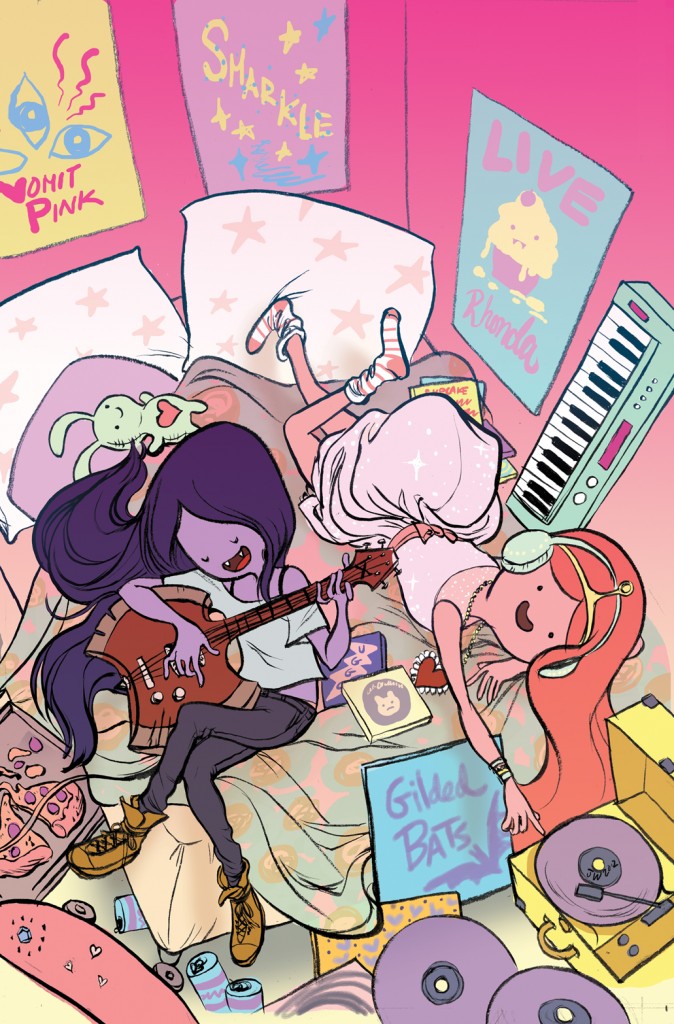 Marceline and the Scream Queens #1

Written and Illustrated by Meredith Gran

You had better be ready to rock the lump out should you decide to add Marceline and the Scream Queens #1 to your comics pull list this week because this first Adventure Time spin-off series is pretty groovy! Marceline: Vampire Queen! Bassist, composer, lead singer and resident undead hottie of the Land of Ooo, is getting the band back together and are ready to hit the road in support of their latest album. Usually, what happens on tour stays on tour, but we’ve got a backstage pass to another Adventure Time story filled with laughter, friendship, danger and can you’d better be ready to lumping rock your face off.

Marceline and the Scream Queens #1 is not only a comic for fans of the cartoon series Adventure Time but might very well be a comic for those who are just fans of music in general. Marcelene’s band harkens back to a time when rock n roll gods partied until they nearly died. When I look at the big, beautiful panels of the band rocking out I don’t get a vibe of any of that Emo garbage that pisses in the ears of today’s youth. No, Marceline and the Scream Queens are surely born from from sounds such as Screaming Females, Mr. Gnome or Switchblade Symphony, trust me, I would know.

Now because Marceline and the Scream Queens #1 is a spin-off title, you can bet that you’re going to be expected to already be familiar with the characters and relationship dynamics that they each share with one another (either in the comics or on the show) to fully appreciate what is happening here. Marcelene and Princess Bubblegum are friends, but like any pairing of good friends, there are bound to be disagreements from time to time. It’s this rift between the two characters that really drives the beginnings of our story within the comic.

“I’ve always looked for some kind of order in my music. Structure. But what you guys do is pure passion … pure energy and love!” I absolutely love and identify with this quote from the book. There are people in this world who have forgotten how precious music is, how personal it can be. What sounds like noise to one person might be a sweet lullaby to another. Marceline and the Scream Queens #1 seems to share this unique perspective about music and it’s ability to heal those who choose to embrace it. For that reason and much more I am totally on board for this six part series.

Also, a thing that’s important to know before I leave you all … This book is completely safe for children and should be given to them. Not only does it promote friendship and the emphasis of pursuing one’s dreams, but it also promotes music awareness which is something that all children should grow up being open minded to.

It’s going to help you out tremendously if you know the characters of Adventure Time when reading this first issue. Though it’s a #1 the books main characters share a long and adventuresome past that you might want to familiarize yourself with before diving in. That being said, this is a great book for children and the aging rocker inside all of us. Buy it!

* Musical Bonus! Remember those bands I mentioned above? Of course you do! Well, here’s a sampling from each of those amazing musical artists!