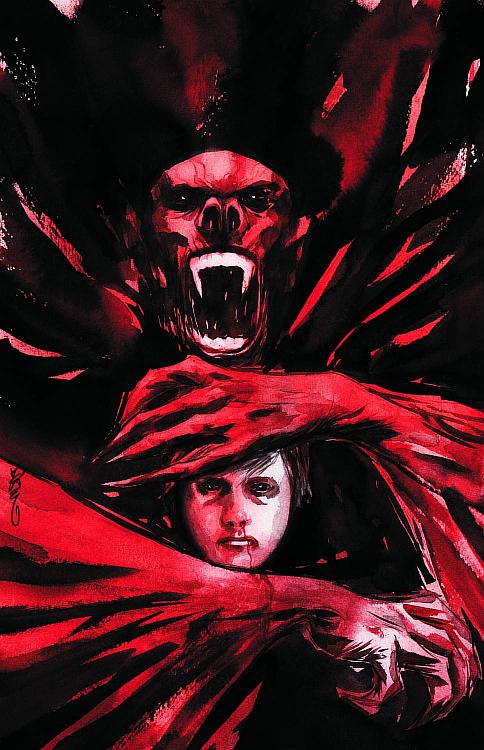 American Vampire is one of my favorite books every month, but I find myself to be just as enthralled in the miniseries when they come around. The minis are used to give us a break from Pearl and Skinner while allowing Scott to delve into the deepest parts of the vampire mythos he has created. In Lord of Nightmares #1 we found out that Dracula has been freed by a group of American rebels. When we pick up in #2, Hobbes is attempting to bring Felicia Book back into to the Vassals to handle the job. She is still defiant, but still allows Hobbes to give us a history of the Carpathian King.

It’s the history aspect of American Vampire that sets it apart from any other bloodsucker book. The foray into the legend of Dracula may be one of my favorite moments of the series as a whole. Not only does Snyder drop hints of Jack the Ripper being a vampire under Dracula’s indoctrination, but he gives us many things to ponder about history as we accept it. Scott’s writing and ideas truly shine when he feels like he can explore every avenue and facet he so chooses. You can tell Snyder was sitting at his desk grinning ear to ear while creating this tale, and I had the same reaction reading through it.

Dustin Nguyen is absolutely fantastic! He is above average at giving us people talking and conveying the wit that some of the characters bring. And he is great at making Hobbes, a person who seems to always be in control and above the situation, look utterly beaten and disheartened. You really feel for the poor guy. But Nguyen shows his stripes when he gets to bring the horror elements to the forefront. His style changes between what you expect to see when just getting a conversation, to terrifying and awe inspiring when he gets to show the horror that Scott Snyder has come up with this time. Though Rafael Albuquerque will remain synonymous with the series for me, Nguyen is giving us something that is on par with what Albuquerque made me fall in love with.

Many people avoid miniseries of popular comics because they feel that the minis don’t really add to the property as a whole. Lord of Nightmares, like Survival of the Fittest before it, is not necessary but does help flesh the world of American Vampire out. It gives it more than the characters we know and adds legends anyone can identify with. It plays with history and adds new wrinkles to the vampires that cohabitate the world. It may not be needed to stay current with the proper series, but there really is no other way for Scott to give us as deep of a world as what he is creating than through minis. And if this is the kind of stories we will keep getting, I will gladly keep buying them.

Buy it- It’s a fun romp through history with Scott Snyder at the helm. We still have yet to see Dracula, but accept that he is a complete and total bad ass nonetheless. Dustin Nguyen is amazing, and there is really no reason to not get on board if you are already a fan of American Vampire. If you aren’t a fan of AV…Well, then, I’m sorry.