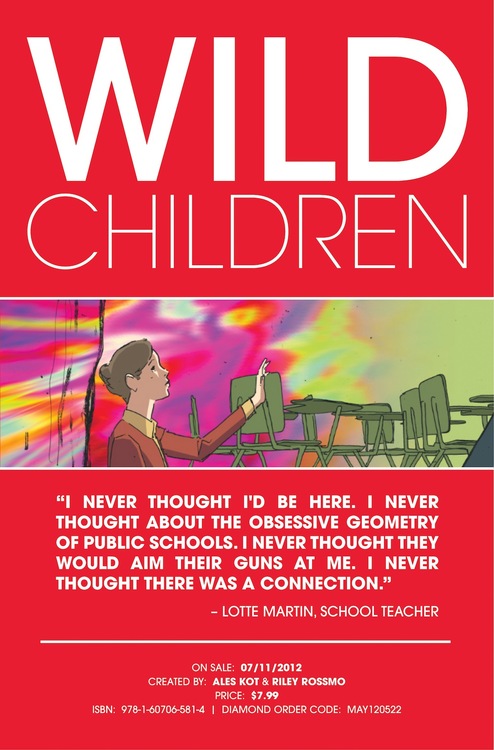 I’m not an angel. You might even say that a couple years of my life were rather um … let’s just say, colorful. Growing up listening to the music of Tool, laughing along to the comedy of the late Bill Hicks and having a father who grew up in a house where Timothy Leary was a regular guest at dinner, I’ve eaten my fair share of hallucinogenics. It’s not something you hear all the time, but I had a really wonderful time in my days of experimentation. I learned more and discovered things about myself and our reality that might have never been known to me without the use of a few dried grams and a sound environment. Ales Kot says at the end of his book that this was a book written for “every single one of you”. I take that statement to heart because there is a part of me that believes that this is true, and that a part of this book was written for me … open minded, tragic, enlightened me.

You’re not going to be able to digest Wild Children after reading it only one time. If you find yourself reading this comic like any other than I’m here to tell you that you’re reading it wrong. Much like Menton3 and Kasrah Ghanbari’s Monocyte comic, Wild Children is a book founded on ideologies and confrontations of the mind, the likes upon which some readers might fear to embrace. People in general don’t like to pick themselves apart too often. It scares them. Once you start to dissect your actions, mentally laying them out in front of you, and see how each selfish decision you’ve made has gotten you to where you are this very day, it’s very likely that you’ll want to shy away from yourself, ashamed of who you really are on the inside. Wild Children reminds you to think for yourself and question authority.

Wild Children is the story of several “gifted” students taking control of their school and using the art of deception and a coffee pot filled with LSD to educate their “superiors” about the laws of their reality. The most important thing to note about this comic is that it takes risks. Not only is the dialogue and overall content of the book extraordinarily heavy handed, but it’s themes and bold approach to this content is what made me love it so much. I love a book that grabs its readers by the throat and doesn’t let go. Wild Children will literally rip open the top of your skull, stick it’s finger deep into your grey matter and stir vigorously.

Backing up all of this cerebral insanity is the scribbley, sweet artwork of Riley Rossmo (Green Wake, Debris). This is perhaps the cleanest (?) I’ve ever seen his art appear in any book and it looks great. Adapting a sort of manga-like vibe, the art focuses much more on the books characters and their facial expressions. Normally, I’m used to Rossmo pulling me in not only with his unique looking creatures but also with his haunting and putrid environments (again, read Green Wake. It’s awesome), but Wild Children allows us an opportunity to see Rossmo get much more up close and personal. The art, for me, served as a somewhat calming effect, as the written content never seemed to want to relent in beating me about my brain matter.

There is no negative in this book for those who are willing to surrender their inhibitions and just let it guide you. I do recognize that this is not a book for everyone. I’d even go so far as to say that if you’ve never done mind altering drugs than you might find yourself at a severe disadvantage. However, it’s a book that people should read. It will force you to think about the way that you live your life and might even wake you up to a lot of the bull@*#$ that we tolerate day in and day out. So do yourself a favor, open up your mind and plan to read this book through at least twice before you tell me that I’m probably just high.

Buy this book and then consume what Terence McKenna once referred to as a “heroic dose” and leave me a message in the comment section after you’re done reading.

* This review was written while listening to the music of Tool