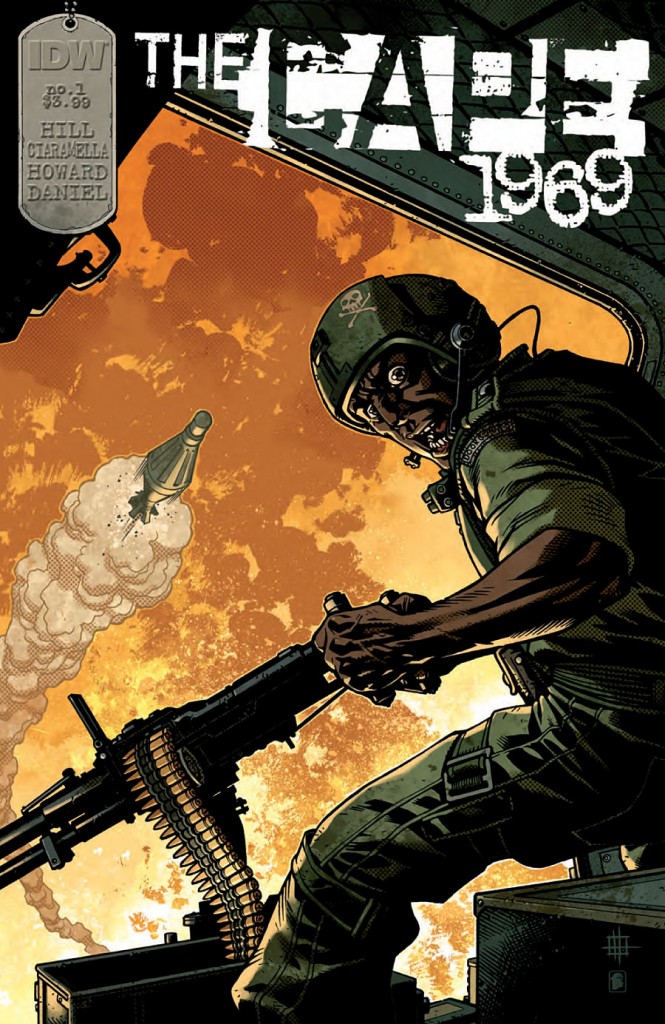 Inspired by the short story “The Cape” by Joe Hill

The year in 1969, and the jungles of Vietnam are alive with gunfire. Taking place years before Joe Hill‘s absolutely wonderful and brutal The Cape, Captain Cory Chase and his band of brothers are patrolling the skies, looking for anyone and anything that might be a threat to the U.S of A. After a well placed missile causes their helicopter to take a nose dive into the forest, it’s up to Captain Chase and what is left of his men to survive. The problem is that this is a foreign land, and Vietnamese troops may not be the only thing lurking inside the shadows.

“Prequels” can sometimes be nasty business. But I’ve found The Cape 1969 #1 to be a welcomed addition to the series and in some ways maybe even necessary if we’re going to truly appreciate the events of experienced in the first volume of the series. What I truly appreciated about The Cape 1969 #1 was its graphic and visceral nature. I felt like I was deep in the s*!# with these characters and that at any moment the enemy could come tromping through the foliage to devour me with bullets. I like books that are not only entertaining to read but that also put you inside of the story. I might have only been with these soldiers for a few pages but their dialogue was strong enough to alert me to the fact that they’re all close to one another. And it was because of this that when the violence level was turned up to 11 that I was genuinely afraid for them, knowing that any one of them could be going home in a body bag at any moment.

The book is certainly for the more mature of audiences. This is not something that you can give your little brother to read while he rides with Mom in the car on their way to the food store. What I’m trying to say here is that if my ass was time-machined back to Vietnam, and you put me on the front line, you bet your ass I’d be cursing up a storm with every bullet that whizzes by my precious ears. So yeah, there’s a lot of harsh language. But that’s what it was like. These are real men in a real war and they’re going to let the expletives fly. Oh yeah, there’s also quite the amount of blood and guts, too. Yum!

The Cape 1969 #1 is the start to something truly wonderful, I can feel it. With all of the right writers and artists in place I have no doubt that we’re going to be treated to a book that not only grabs you on an emotional level, but goes the extra mile to dig deep down and satisfy your more carnal instincts as well. I want to know how Captain Chase finds the cape. I want to know why it appears to imbued with super powers. Is it magical? Is it cursed? We’re just going to have to dig deep into the jungle to find out.

VERDICT: An absolute buy. If you haven’t read Joe Hill‘s The Cape then you should get right on that. After you read and love the hell out of that you should buy and read this comic. I think that just about covers it.