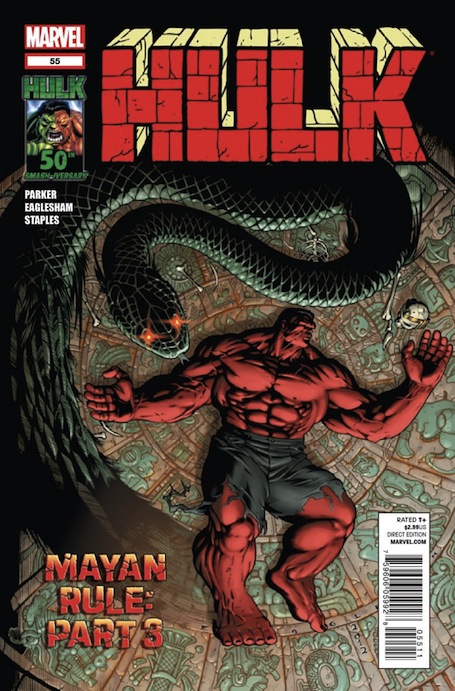 Jeff Parker’s latest issue of Hulk is third in the Mayan Rule arc, where the ancient Mayan gods have returned to the Marvel Universe in teleporting pyramids, abducting and draining the power of superhumans to facilitate their return.

I’ll admit to having a little trepidation about this idea. It’s, of course, capitalizing on the 2012 Mayan Apocalypse idea. But it conjures up the idea of cultural appropriation. And while Parker seems to have done his research on the Mayan deities, I’m not sure as to how accurate these portrayals are. Then again, this is the same universe that depicts the Norse and Greek gods as superhuman cosmic pantheons, so I can accept it in that vein.

Honestly, I’m not as in love with the General Ross version of the Hulk as I am the traditional green variety, but Parker seems to be at least giving him a character arc, moving him toward being a better human being, redeeming him. I really like the inclusion of Machine Man, Rick Jones as A-Bomb, and Annie, the Life Model Decoy.

This issue is mostly the Hulk team squaring off against the Mayan gods, with several new gods appearing as the Mayans drain the power of other superheroes. Interestingly, Ross acts as a tactician here, figuring out, with Machine Man’s help, the Mayans’ plan and leading better in that regard than Captain America who sends in an Avengers affiliate team consisting of all Latino superheroes.

The issue ends on a cliffhanger, with perhaps the most dangerous Mayan god appearing, and it seems as if the next issue will tie up the storyline. I find myself wondering if this will end with a big fight or if there will be something more intellectual happening.

Dale Eaglesham does a good job on the art chores, here, his clean lines working well with the Hulk and his compatriots and he gives the Mayan gods (to my eye at least) the right look.

This issue, and by extension this arc, isn’t bad by any means, but it seems to lack some kind of punch. And to me at least, it suffers in comparison to Aaron’s Incredible Hulk. If you’re invested in the ongoing storyline, this one is worth picking up, but aside from cameos from Alpha Flight and a lineup of Mayan gods, there’s not much here that screams exciting to me.