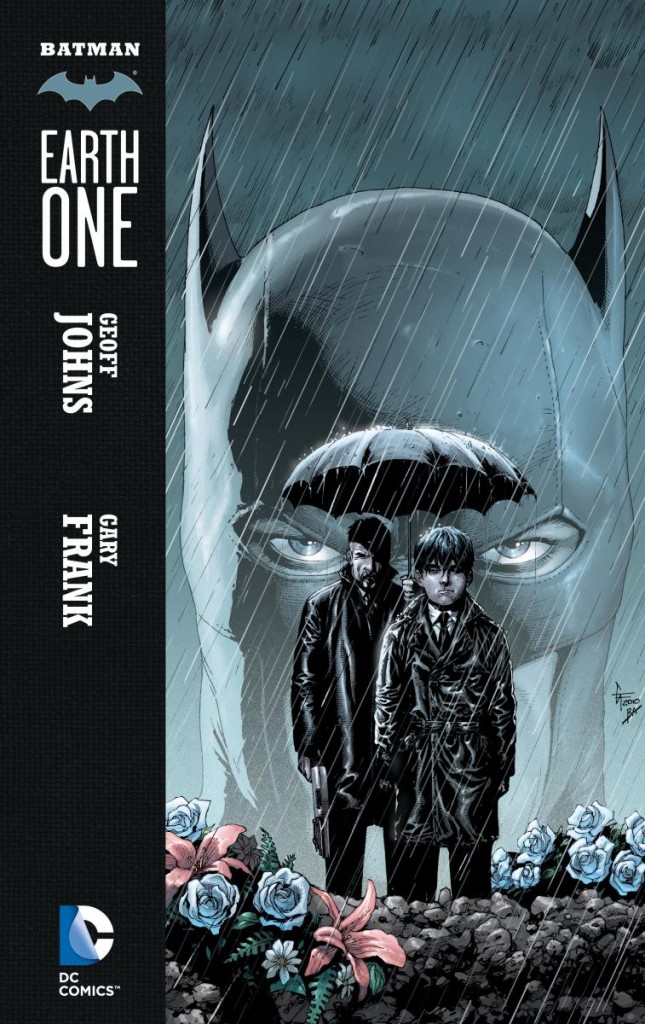 The origin of The Caped Crusader is modern folklore, an ever-present and universally known tale that, to modern audiences, is as important as Homer’s Odyssey or the “Please sir, I want some more” of Oliver Twist.  You can’t throw a stone without hitting someone who knows that Bruce Wayne’s parents were murdered in an alley when he was a child. As powerful as this inciting event is, the story has been reshaped, tweaked and expanded upon countless times, and it’s this well-worn narrative track that hampers Geoff Johns and Gary Frank’s Batman: Earth One the most. But, after that slow start, the book employs solid storytelling, a creepy villain and some interesting tweaks to Bruce Wayne’s early career as Batman to become something more than just a retread of well trodden ground. Whether the book will become something essential to  the Batman pantheon will take more volumes, but what Johns has created is at the very least, a fun diversion from the main continuity of The Dark Knight.

Batman: Earth One works as an almost bizarro compliment to Frank Miller’s groundbreaking Batman: Year One.  It sets out to tell the story of a young Bruce Wayne who is making his first foray into the cape and cowl. This Gotham City, much like Miller’s, is a disgusting and dirty place, filled with dirty cops and devious criminals, but there are some distinct changes to the established themes at work here.

Writer Geoff Johns fills his book with a familiar cast of supporting characters and flips them all on their ear.  Fans of any Bat media know Jim Gordon as an intrepid cop, determined to cut through the grim filth that covers his city, but here he is a man who has given up. It was intriguing to see such a great man be forced into submissiveness by the very place he lives, but that means nothing if there isn’t another character to contrast him with. Harvey Bullock, usually the heel to Jim’s hero, is recast here as a playboy Hollywood detective who starred in his own reality TV show. He’s brash, egotistical, and a little stupid, but he’s also essentially a good man who cannot understand why Gordon sits idly by as Gotham falls apart. It’s a fantastic and refreshing take on the character.

Barbara Gordon, whip smart and brave as a gladiator, comes of very well in this tale, as does Oswald Cobblepot who is recast as the evil mayor of Gotham City. Johns imbues him with a undercurrent of ferocity and danger that makes this often maligned villain truly intimidating. Then there is Batman: Earth One‘s take on the Caped Crusader’s most important ally, Alfred Pennyworth. The droll butler has always been vital to Batman’s survival, but here he is set up as the man who actually trained him. This Alfred is younger, more capable and more active in Bruce’s efforts and it completely changes the dynamic between the two characters. All of these supporting players are written fresh and more importantly, written incredibly well, but what about the main man himself?

Geoff Johns is a great writer, one who has redefined the character of Green Lantern and who is doing the same for Aquaman right now. But he is also a writer whose voice doesn’t translate well to the entire pantheon of heroes. Even in Johns’ best work I’ve always found his characterizations of The Dark Knight to be somewhat lacking and here, although it’s better than past versions, Batman never quite feels like Batman to me. That’s a nebulous and some what unfair critique to lay at the feet of a writer, but there is something intangible about the character, the way he growls at bad guys or the way he treats other people as Bruce Wayne, that some writers nail and some don’t. These types of differences would work if this was a radically different take on the character, but there is too much “sameness” in Johns take on Bruce himself, for these to feel like anything more than inconsistencies. It’s only in his interactions with Alfred, which as said before are radically different than in past incarnations, that the differences in Mr. Wayne feel earned instead of forced. However, this is only the first part of a story, and I may in time grow to appreciate this new Batman, I’m just not there yet.

Buy It – Batman: Earth One is not without flaws, a subpar Batman characterization and retold origin story, but writer Geoff Johns also takes several refreshing liberties with many of Gotham’s most well worn side characters. The art by Gary Frank is very solid, though not spectacular, but it does have one notable inclusion, Batman’s eyes. I’m personally a fan of the white slits, but seeing Bruce’s eyes through the cowl does portray a vulnerability in our hero that I think is vital to what Johns is trying to do. This is not Batman: Year One, The Killing Joke or The Dark Knight Returns, but it is a sharply written alternate universe Batman story that offers plenty of surprises for both the constant and new Batman reader.