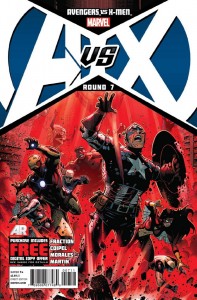 Every once in awhile a comic book series comes around that takes me by surprise. It usually starts as a ho-hum-I’ll-give-this-a-try and morphs into a gasp-inducing, goosebump growing, thought-provoking piece of work. Avengers vs X-Men is that series for me.  What started as pure fangirling over my favorite characters duking it out turned into a story that is pushing all the right buttons. Issue #7 raises the stakes when the Phoenix Five come out in full force against the Avengers.

Now that the Scarlet Witch is involved in the AvX tussle, everything is suddenly personal. No one has forgotten (or forgiven, for that matter) her little sentence fragment that changed the lives of mutants forever. With power that rivals the Witch’s, the X-Men are on a personal mission to confine and neutralize her as a threat. As a result, we start seeing some heavy firepower in the panels. My favorite moment is when Magik unleashes some of the Force on Wanda only to be met with return fire. The panels looked fantastic on my tablet, and it’s a shame that the claws of Magik’s Force is not a full two-page spread.

Anybody who grew up on the X-Men 90s cartoon knows that the Phoenix feeds off emotions of humans (I’m sure it was stated in the comic books as well, but I can only speak for the cartoon, seeing as I watched it obsessively growing up). Though split into five parts, the Phoenix does not seem diminished in any one of the X-Men it possesses. If anything, the Phoenix enhances the person’s most dominant characteristic. For Scott, his boy-scout attitude comes out in full force. Emma and Namor both start to show some dissonance with Scott’s decisions, and Namor’s narcissistic, power-hungry personality shines through. I’m starting to get the “with great power comes great responsibility” lesson as we are shown how ultimate power can ultimately corrupt, no matter how good the intentions are.

AvX has this tendency to try to one-up itself each issue. This issue introduced some brutal fighting and, notably, the very real possibility of heroes dying. The Avengers’ location is known, and they are about to feel the wrath of a wronged mutant. Their only hope? A reality-bending witch and a girl who could not accept the Phoenix.

If you haven’t been picking up Avengers vs X-Men, I strongly encourage you to do so, especially if you are a Marvel Universe fan. I am starting to get the feel that the resolution of the conflict will result in a universe-changing decision. The reveal that Scarlet Witch’s powers are connected to the Phoenix seems to point to her role in the development of Hope (I might be stretching it here, but she has the potential to make Hope very, very powerful). If you are already reading this book, KEEP READING! I want there to be people around as excited as I am to see the ending of this story.